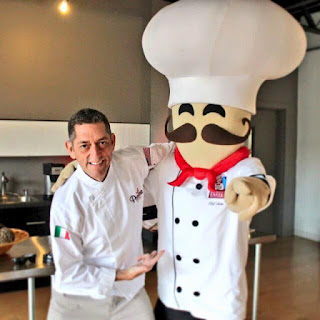 Chef Martin Lopez
Born in Mexico City by a hardworking, dedicated Mother, the versatility of ingredients were shown to Martin at an early stage. At seven years old, he was already part of the kitchen household responsibilities and showing his passion for cooking.

After travels to Europe, Mexico, and South America, Chef Martin has created an array of dishes of multicultural cuisines, and started to combine ingredients from all around the world to create pieces that now all of us are more accustomed to. His background and his love of art, along with his cooking, married into what he calls now of ChefMartin.Net developing this nonprofit site to share his feelings and passion about his cooking and the community.

He now has thousands of followers on Facebook, twitter and his website, as he continues to cook, write, document, develop recipes, concepts and share his passion for his cooking and food trends. He is often seen on TV shows, live public presentations and radio around the country including CBS, FOX, and ABC.

Teaming up with top restaurateurs from around the country such as recently in 2013, Chef Martin and Richard Nix from St Louis Mo, owner of Butler’s Pantry and Bixby’s at the City History Museum, created one of the newest, most delicious spots in the country, with a new concept in an Italian bakery called “Piccione Pastry” Mexican Novelle, a cuisine with European undertones.
Professional Chef, Food Writer, Blogger and Culinary Journalist, Published Author, Culinary Ambassador for the Hispanic Community, TV Personality and Host.
Para mas información visita, www.ChefMartin.Net
Publicadas por Axel a la/s 4:00:00 p. m.