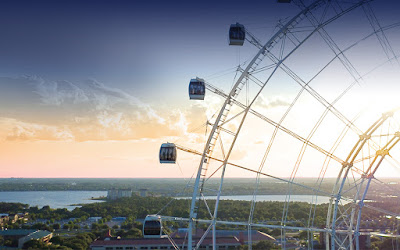 This October, the Coca-Cola Orlando Eye is set to become the home of Halloween and the spookiest sight in all of Central Florida transforming into a 400-foot tall spider web with giant creepy-crawlies, an all-new light and music show, themed Snapchat filter and more family fun as part of “Spooky Nights and Spider Frights”, Friday, October 13th to Saturday, November 4th.

The itsy bitsy spider may climb up the water spout, but this month, it’s an enormous 60-foot spider and ten of its eight-legged friends that will take over the top of the Coca-Cola Orlando Eye building creating quite the creepy sight for all to see ­– and take a selfie with of course!

From the I-Drive 360 courtyard, guests can also experience the witching hour as 64,000 LED lights bring the tallest observational wheel on the United States East Coast to life in a kaleidoscopic ten-minute show synchronized to an iconic Halloween soundtrack that is sure to have everyone dancing. The light show will run Sun-Thurs at 8pm and Fri-Sat at 8pm and 10pm.