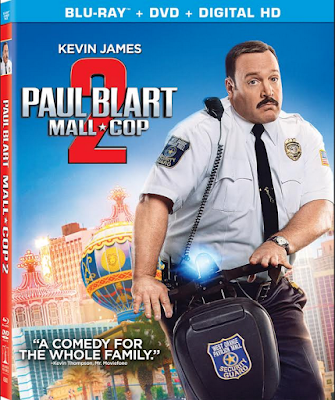 After six years of keeping our malls safe, Paul Blart has earned a well-deserved vacation. He heads to Las Vegas with his teenage daughter before she heads off to college. But safety never takes a holiday and when duty calls, Blart answers.
Directed by Andy Fickman from a screenplay by Kevin James and Nick Bakay, PAUL BLART: MALL COP 2 was produced by Todd Garner, Kevin James, Adam Sandler and Jack Giarraputo, with Marty P. Ewing, Ben Waisbren and Jeff Sussman serving as executive producers.
Blu-ray & DVD Bonus Features Include:

Security Force: The Cast of Paul Blart 2” featurette – The gang is all back with some very notable additions!
How to Make a Movie” featurette – Director Andy Fickman gives a tour of each department on the film.

Six Deleted Scenes
Gag Reel
Six Featurettes
Action Adventure” – Cast and Crew talk about creating the action set pieces from the stairs to the Zip Line!
Back in the Saddle” – Kevin James gets his bearings on his old friend, the Segway.
“Le Reve” – Go behind the scenes of La Reve as filming gets underway.
“No Animals Were Harmed” – Paul’s attacker is revealed in his natural state.
“Sales Tactics” – Sometimes nailing a line takes time. A lot of time.
“Real Cops” – Hear from Nevada’s finest about their thoughts on Blart.
Photo Gallery
PAUL BLART: MALL COP 2 has a run time of approximately 94 minutes. The film is rated PG for some violence.
Visit Sony Pictures Home Entertainment on the Web at www.SonyPictures.com
Publicadas por Axel a la/s 12:58:00 p. m.