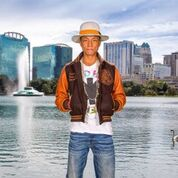 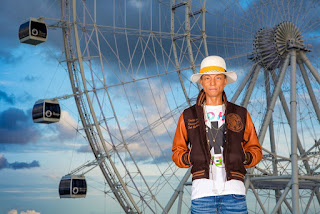 Madame Tussauds Orlando has rolled out the red carpet for its newest celebrity wax figure with the arrival of Pharrell Williams, 11-time Grammy Award winner, singer, producer, fashion designer, and coach for NBC’s The Voice.

Pharrell is styled in the same outfit he wore when he received his star on the Hollywood Walk of Fame. He is wearing a jacket from his own brand, Billionaire Boys Club, accessorized with jewelry from Chanel, and his hat is a custom creation from French hat maker Nick Fouquet, which features a match, the fashion designer’s signature trademark. The figure is featured inside the music room of the new wax attraction.

Pharrell’s first figure was unveiled earlier this year at Madame Tussauds New York, styled in his infamous Vivienne Westwood mountain hat from his performance at the 2014 Grammy Awards. Madame Tussauds artists and sculptors spent months on research to create the most accurate representation of the Happy and Get Lucky singer.

Pharrell has worked with some of the top talents in the music world, including Britney Spears, Daft Punk, Kanye West and Snoop Dog. The music industry has honored Pharrell with 11 Grammy Awards (including 2004’s and 2014’s Producer of the Year) and the ASCAP’s prestigious Golden Note Award in 2012. Billboard named him Producer of the Decade in 2010. He also received a 2014 Academy Award Nomination for his original song Happy, featured in the animated film Despicable Me 2.

Madame Tussauds is world-renowned for the creation of detailed and lifelike wax figures that pay homage to A-list celebrities from film and television, sports icons, musicians from all genres, and notable figures from history and pop culture. Each Madame Tussauds figure is truly a work of art, involving teams of professional artists and sculptors who spend months on extensive research and take more than 300 measurements to recreate world-famous icons, to achieve the kind of astonishing realism that has been at the heart of the 250-year Madame Tussauds legacy.

Guests at Madame Tussauds Orlando will experience the essence of America with this brand new, immersive and interactive wax experience, bursting with family fun and world-class entertainment, as they move through themed areas meeting all of their favorite stars from award-winning film actors, to historical and modern world leaders, sports stars, music legends as well as figures important to Florida. All visitors can shake hands with the president, get on stage with rock stars and pop princesses, or get up close and personal with a Hollywood heartthrob and take the ultimate selfie! For more information, visit www.madametussauds.com/orlando.

Fun Facts:
·       Pharrell is styled in the same outfit he wore when he received his star on the Hollywood Walk of Fame
·       His figure is wearing a jacket from Pharrell’s own brand, Billionaire Boys Club, accessorized with jewelry from Chanel, and his signature hat is a custom creation from noted hat maker Nick Fouquet
·       More than four months of extensive photo and video research was done by Madame Tussauds artists to ensure accuracy of Pharrell’s wax figure

· Madame Tussauds Studios London has been making wax figures for over 150 years. Each masterpiece takes four months, and a team of 20 dedicated sculptors, to create. Over 300 precise body measurements are referenced, real head hairs are inserted one by one, and countless layers of paints and tints are applied to build up skin tones - all to achieve the kind of astonishing realism that has kept Madame Tussauds world renowned for over two centuries.