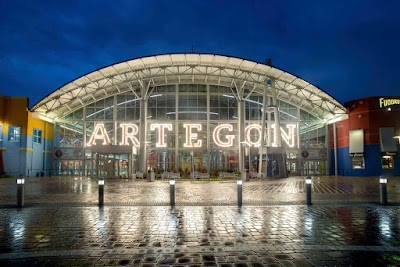 ARTEGON MARKETPLACE SETS THE STAGE FOR WEEK-LONG
FIRST ANNIVERSARY CELEBRATION
FREE ADMISSION FESTIVITIES INCLUDES AMPED UP SIGNATURE EVENTS, CONCERT WITH SUPERSTAR RECORDING ARTISTS, FUN FOR ALL AGES … AND A REAL HOUSEWIFE OF NEW JERSEY
Artegon Marketplace has unveiled a week-long line-up of free admission festivities and amped up signature events to celebrate its first anniversary and transformation into Orlando’s most eclectic, diverse and truly original shopping, culinary and entertaining destination.  Artegon’s Anti-Ordinary First Anniversary Spectacular kicks off on Monday, November 16 with a free wine stroll and tasting of more than 10 varieties of vino with a special guest appearance by one of the Real Housewives of New Jersey; continues nightly with special events for every age, from a movie night to family food truck rally; and culminates on Saturday, November 21 with a free live concert hosted by Orlando hometown favorite, Joey Fatone from the legendary boyband N’SYNC. Here’s the week’s line-up; pop the champagne and let’s get this party started!

MONDAY, NOVEMBER 16, 6-9 P.M.    Sip.  Stroll.  Shop.
Cheers to Artegon’s anniversary!! During this signature event, Wine Stroll guests will meander by wine tasting stations scattered throughout the entire center. Shoppers can sample more than 10 varieties paired with bite-sized morsels that perfectly enhance each wine – all for free (while supplies last). Sip and stroll through the center while enjoying live Jazz and Flamenco music. As you’re sauntering from station to station, you might just bump into New Jersey Housewife Melissa Gorga! Be among the first 150 shoppers in line at the anniversary edition of the Wine Stroll and receive a commemorative Artegon-embossed stemless wine glass. Do a little shopping. Earn free movie tickets.  See you Monday.

The ARTegon Co-op is popping up at Artegon Marketplace.  6-9 P.M. An anti-ordinary art-oriented pop-up shop is celebrating its arrival at Artegon through an Opening Gala, spearheaded by Orlando’s own Justin Skip Skipper and Chris Tobar Rodriguez. Opening festivities involve appetizing foods and bubbly drinks (while supplies last) plus live music by DJ BMF.  Join the celebration of #AntiOrdinary #art #cooppopupshop

TUESDAY, NOVEMBER 17, 5-7 P.M.    The Art of Beer
Craft beers have tapped into America’s love of suds. The celebration continues on Tuesday with the anniversary edition of The Art of Beer. Sample and savor more than 10 styles of Florida craft beers (while supplies last). The first 150 guests in attendance will enjoy their brewskis from a commemorative Artegon-embossed glass mug. Use the mug to try out one, three or all 10 of the craft beers. What else goes well with beer? Food and music! Enjoy discounted meals from Artegon food vendors while kicking back to the Smoking Torpedoes. Real Radio 104.1 talk show host favorite Dirty Jim will make an appearance and give away prizes to local loyal fans. And that’s not all. Former Orlando Magic basketball player Nick Anderson will be there. See you Tuesday.

THURSDAY, NOVEMBER 19, 11 A.M. – 8 P.M.    Prize Day, All Day
As a “Thank You” to everyone who’s made Artegon Marketplace the area’s most eclectic, diverse and truly original shopping, culinary and entertaining venue, the center is giving away prizes every hour on the hour from 11 a.m. to 8 p.m. to lucky shoppers. Prizes include gift cards to a number of Artegon’s new retailers and artisans, free meals at the center’s eateries, free movie passes – and other unexpected surprises throughout the day. In order to win the prizes, shoppers must be present.  See you Thursday.

SATURDAY, NOVEMBER 21, 11. A.M. - 9 P.M.    Artegon’s Festival of Music
The grand finale of Artegon’s Anti-Ordinary Anniversary Week Spectacular is Artegon’s Festival of Music, including all-time favorites and up-and-coming recording artists and entertainers. The entire community is invited to experience the stylings of the following recording superstars and entertainers at this free concert. The celebration kicks off at 11 a.m. with local entertainers, followed by a DJ getting everyone into the groove at 4 p.m. and headliners at 5 p.m. Sample from a variety of food trucks presented by Food Truck Crazy. Shoppers who spend $20 or more during the event will receive a $5 Food Truck Buck to spend at any food truck of their choice that evening. Meet and greets with select artists will be available. Check out Artegon Marketplace’s website and Facebook events page for dates, times and details.  See you Saturday.

SAMANTHA MUMBA
Samantha Mumba is an Irish singer and actress whose hit single Gotta Tell You reached the Top 10 in the United States, United Kingdom, and Ireland in 2000.  Her album Gotta Tell You stayed on the charts for six months and is certified platinum with a total of four million copies sold to date. Mumba enjoyed five more Top 10 hits in the UK and her song Baby, Come Over peaked at 50 on the US charts.

JUDY TORRES
Judy Torres is known as “The Queen of Freestyle.” She scored club hits with songs such as Please Stay Tonight, Come into My Arms, Love Story, I Love You, Will You Love Me, No Reason to Cry, and chart- topping remake of Journey’s Faithfully. Torres has performed non-stop to sold out crowds since the release of her first single in 1987. In 1998, Torres joined iHeart Radio’s 103.5 FM KTU in New York as an on-air personality.

AARON CARTER
Aaron Carter came to fame very early in life at the age of seven and released his first self-titled debut album at the age of 10. He was one the biggest teenage heart throbs in the late 1990’s and in the early 2000’s. Carter’s second album Aaron’s Party (Come Get It) put him on the map, selling 1.5 million copies. He is set to release new music in early 2016. In addition, Carter has recently starred in the Broadway classic Fantasticks, and competed on Dancing with the Stars.

BEFORE YOU EXIT (BYE)
This Orlando-based band consists of three brothers: Connor, 21 (vocals/guitar); Riley, 19, (lead vocals); and Toby, 17, (vocals, guitar).  They caught the attention of the legendary music manager Johnny Wright, who signed the group. Wright also manages Justin Timberlake and many others. BYE was named the winners of the Macy’s iHeart Radio Rising Star campaign, and performed at the 2014 Macy’s Thanksgiving Day parade.  BYE has had three hit singles on the Radio Disney charts.

ROB BASE
Part of the hip hop duo with DJ E-Z Rock, Rob Base is most famous for his hit single It Takes two.  This song was a Top 40 hit and became platinum, along with their album. They were also known for being pioneers of the crossover success that rap music would have in the popular music mainstream.

JOEY FATONE (HOST)
Best known as a member of the legendary boyband N’SYNC, Joey Fatone’s current hosting gigs include the announcer on Family Feud; Food Network’s Rewrapped; and Live Well Network’s My Family Recipe Rocks. Joey is also guest host of the live version of The Price is Right in Las Vegas.