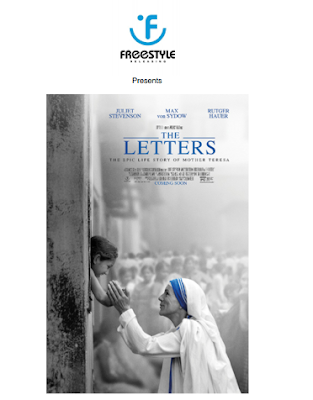 MOTHER TERESA, recipient of the Nobel Peace Prize, is considered one of the greatest humanitarians of modern times. Her selfless commitment changed hearts, lives and inspired millions throughout the world.

THE LETTERS, as told through personal letters she wrote over the last 40 years of her life, reveal a troubled and vulnerable women who grew to feel an isolation and an abandonment by God. The story is told from the point of view of a Vatican priest charged with the task of investigating acts and events following her death. He recounts her life’s work, her political oppression, her religious zeal and her unbreakable spirit. Written and directed by William Riead, THE LETTERS stars the acclaimed four-time BAFTA nominated British Actress Juliet Stevenson as Mother Theresa in a transformational performance that spans over 50 years, Academy Award Nominee Max Van Sydow and Golden Globe nominee Rutger Hauer.

The film was executive produced by Corky Barton and Lourden Saks and produced by William Riead, Lisa Riead and Tony Cordeaux. A CinemaWest and Riead Production Corporation Production, The LETTERS will be released by Freestyle Releasing Dec 4, 2015 nationwide.
The film is rated PG.