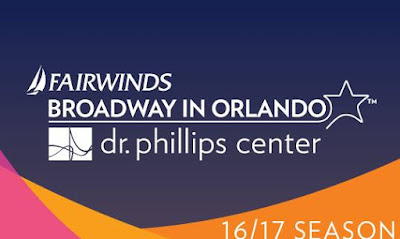 FAIRWINDS BROADWAY IN ORLANDO AT
DR. PHILLIPS CENTER FOR THE PERFORMING ARTS
2016 – 2017 SEASON ANNOUNCED
The Dr. Phillips Center for the Performing Arts, Florida Theatrical Association and Broadway Across America announce the roster of shows that will arrive in the Walt Disney Theater during the FAIRWINDS Broadway in Orlando 16/17 season.  Boasting a varied collection of smash-hits from the Great White Way, the season kicks-off with The Illusionists – Live from Broadway™, a mind-blowing spectacular showcasing the talents of seven of the most incredible illusionists on earth. Joining those jaw-dropping acts is the 2015 Tony Award®-winner for Best Play, The Curious Incident of the Dog in the Night-Time, four-time Tony Award-winning An American in Paris, the previously-announced three-week return engagement of blockbuster Wicked, the 2014 Tony Award-winner for Best Musical, A Gentleman’s Guide to Love & Murder, and the Theatre Under The Stars production of the treasured family classic Disney’s The Little Mermaid. Rounding out the season are two other acclaimed tuners, TIME Magazine’s #1 Show of the Year, Matilda The Musical, the award-winning musical based on Roald Dahl’s much-loved novel and Finding Neverland, Broadway’s new hit and winner of Broadway.com’s Audience Choice Award for Best Musical.

Current subscribers can renew their seats now through April 4 for the upcoming season. New subscription packages are also available. To renew or purchase a subscription, please visit OrlandoBroadway.com, or call the season subscriber hotline at 800.448.6322 (Monday-Friday, 9 a.m. – 5 p.m.). Subscriptions are also available in person at the Florida Theatrical Association Box Office, located at 100 S. Eola Drive, Suite 101 in downtown Orlando (Monday-Friday 10 a.m. – 5 p.m.).
Prices for a seven-show subscription start at $240. Prices vary based on seating location.

FAIRWINDS Broadway in Orlando season subscribers enjoy a number of exclusive benefits, including:
-       Access to the best seats in the best locations for all seven shows before the general public
-       The opportunity to purchase additional tickets for friends and family before they go on sale to the general public
-       Ticket exchange privileges and free lost ticket replacement

Tickets for individual shows in the 16/17 season will be made available at a later date.

THE ILLUSIONSISTS – LIVE FROM BROADWAY™
On the heels of a highly successful multi-city tour and run on Broadway, the world’s best-selling touring magic show’s Orlando engagement is part of a 45-city U.S. tour. Full of hilarious magic tricks, death-defying stunts and acts of breathtaking wonder, THE ILLUSIONISTS has shattered box office records worldwide and thrilled audiences of all ages. Creative Producer Simon Painter said, “We can’t wait to bring this electrifying show to Orlando for a truly entertaining experience for the whole family.” THE ILLUSIONISTS is the most non-stop and powerful mix of outrageous and astonishing acts ever to be seen on the live stage. The magic appears at the Dr. Phillips Center October 4 – 9, 2016.

THE CURIOUS INCIDENT OF THE DOG IN THE NIGHT-TIME
Hailed as “one of the most fully immersive works ever to wallop Broadway” by The New York Times, this “dazzling” (Associated Press) new play by Simon Stephens is adapted from Mark Haddon’s best-selling novel and directed by Tony-winner Marianne Elliott. Fifteen-year-old Christopher has an extraordinary brain; he is exceptionally intelligent but ill-equipped to interpret everyday life. When he falls under suspicion for killing his neighbor’s dog, he sets out to identify the true culprit, which leads to an earth-shattering discovery and a journey that will change his life forever. Winner of five 2015 Tony Awards, including Best Play, THE CURIOUS INCIDENT OF THE DOG IN THE NIGHT-TIME arrives at the Dr. Phillips Center November 1 – 6, 2016.

AN AMERICAN IN PARIS
Direct from Broadway, AN AMERICAN IN PARIS is the new hit musical about an American soldier, a mysterious French girl and an indomitable European city, each yearning for a new beginning in the aftermath of war. Acclaimed director-choreographer and 2015 Tony Award-winner Christopher Wheeldon brings the magic and romance of Paris into perfect harmony with Tony Award-winning orchestrations of unforgettable works from George and Ira Gershwin in the four-time Tony Award-winning production that earned more awards on Broadway than any other musical in the 2014-2015 season! AN AMERICAN IN PARIS dances into the Dr. Phillips Center December 13 – 18, 2016.

WICKED
Broadway’s biggest blockbuster returns to Orlando this winter. The surprising tale of an unlikely friendship between two women in the Land of Oz, WICKED tells the untold story of the Wicked Witch of the West and Glinda the Good, long before Dorothy dropped in. Elphaba, born with emerald-green skin, is smart, fiery and misunderstood. Glinda is beautiful, ambitious and very popular. The remarkable odyssey of how these unexpected friends changed each other’s lives for good has made WICKED one of world’s most popular musicals. Declared “a cultural phenomenon” by Variety and “the best musical of the decade” by Entertainment Weekly, WICKED has been performed in over 100 cities in 13 countries around the world, and it flies into the Dr. Phillips Center for a three-week engagement January 11 – 29, 2017.

A GENTLEMAN’S GUIDE TO LOVE & MURDER
Getting away with murder can be so much fun…and there’s no better proof than the knock-‘em-dead hit show that’s earning unanimous raves and won the 2014 Tony Award for Best Musical – A GENTLEMAN’S GUIDE TO LOVE & MURDER! Coming direct from New York, where a most gentlemanly NPR critic said he’d “never laughed so hard at a Broadway musical,” GENTLEMAN’S GUIDE tells the uproarious story of Monty Navarro, a distant heir to a family fortune who sets out to jump the line of succession by – you guessed it – eliminating the eight pesky relatives (all played by one fearless man) who stand in his way. All the while, Monty has to juggle his mistress (she’s after more than just love), his fiancée (she’s his cousin, but who’s keeping track?), and the constant threat of landing behind bars! Of course, it will all be worth it if he can slay his way to his inheritance…and be done in time for tea. The Hollywood Reporter raves, ”GENTLEMAN’S GUIDE restores our faith in musical comedy,” and The New York Times cheers, “It will lift the hearts of all those who’ve been pining for what sometimes seems a lost art form.” The new musical that will have you dying with laughter arrives at the Dr. Phillips Center February 7 – 12, 2017.

DISNEY’S THE LITTLE MERMAID
Proclaimed by the Houston Chronicle as “colorful entertainment, wrapped up in an attractive production,” DISNEY’S THE LITTLE MERMAID is sure to charm audiences of all ages! In a magical kingdom fathoms below, we meet Ariel, the little mermaid who is tired of flipping her fins and longs to be part of the fascinating world on dry land. Joining her are Sebastian, Ariel’s crabby sidekick, Ursula, the evil sea witch, Triton, King of the Sea, and the handsome human Prince Eric. Based on the Disney animated film and hit Broadway musical, the Theatre Under The Stars production of THE LITTLE MERMAID is making its Orlando debut. The show features all the favorite songs like “Under the Sea” and “Part of Your World,” as well as new songs written by Oscar-winning Disney composer Alan Menken, the mastermind behind  Beauty and the Beast, Aladdin and Pocahontas. DISNEY’S THE LITTLE MERMAID dives into the Dr. Phillips Center March 7 – 12, 2017.

MATILDA THE MUSICAL
“Welcome to the deliriously amusing, heartwarming, head-spinning world of MATILDA. You won’t want to leave,” cheers Bloomberg News. TIME Magazine’s #1 Show of the Year and the winner of 50 international awards, including four Tony Awards, MATILIDA is the story of an extraordinary girl who, armed with a vivid imagination and sharp mind, dares to take a stand and change her own destiny. Based on the beloved novel by Roald Dahl, this new musical continues to thrill sold-out audiences of all ages on Broadway, London’s West End, and in Sydney, Australia. The New York Times proclaims, “Rejoice. It is even more glorious than promised,” and The Wall Street Journal says, “The makers of MATILDA have done the impossible – triumphantly! It is smart, sweet, zany and stupendous fun.” The mischief arrives at the Dr. Phillips Center May 9 – 14, 2017.

FINDING NEVERLAND
Broadway’s biggest new hit and the winner of Broadway.com’s Audience Choice Award for Best Musical, this breathtaking smash “captures the kid-at-heart,” says TIME Magazine. Vogue cheers, “It’s a must-see you’ll remember for years to come!” Directed by visionary Tony-winner Diane Paulus and based on the critically-acclaimed Academy Award-nominated film starring Johnny Depp, FINDING NEVERLAND tells the incredible story behind one of the world’s most beloved characters: Peter Pan. Playwright J.M. Barrie struggles to find inspiration until he meets four young brothers and their beautiful widowed mother. Spellbound by the boys’ enchanting make-believe adventures, he sets out to write a play that will astound London theatergoers. With a little bit of pixie dust and a lot of faith, Barrie takes this monumental leap, leaving his old world behind for Neverland, where nothing is impossible and the wonder of childhood lasts forever. The magic of Barrie’s classic tale springs spectacularly to life in this heartwarming theatrical event. FINDING NEVERLAND is “far and away the best musical of the year!” (NPR), and it lands at the Dr. Phillips Center June 6 – 11, 2017.