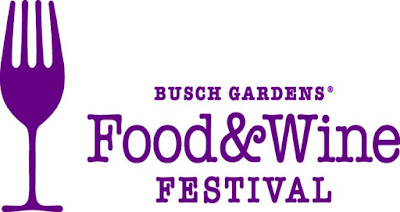 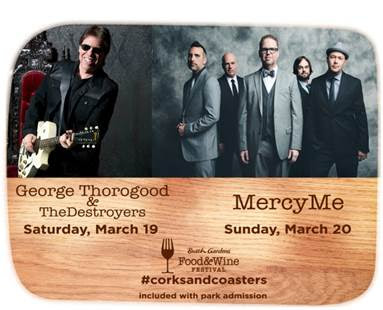 The festival takes place on Saturdays and Sundays now through April 24.  Concerts are at 6 p.m. and are included with any Pass, Fun Card or daily admission.George Thorogood & The Destroyers- Saturday, March 19 at 6 p.m., Gwazi Park

George Thorogood & The Destroyers embody and define powerhouse rock with unchained attitude and a fierce love of country, blues and R&B. Over the course of sixteen studio albums, including six Gold and two Platinum discs, the band has had tremendous success, opening doors to legendary appearances on SNL and record-breaking tours around the world. Their catalog of classics include “Bad to the Bone,” “I Drink Alone,” “One Bourbon, One Scotch, One Beer” and “ Move it on Over.”

Grammy-nominated, multiple American Music Award and Dove Award winners, MercyMe, have garnered 27 No. 1 Christian radio singles and four consecutive mainstream radio hits with “I Can Only Imagine,” “Here With Me,” “Homesick” and “So Long Self.” Their radio success has continued with their recent No. 1 singles “Flawless” and “Greater,” which held the top spot on Christian radio for 16 weeks. Additionally, MercyMe made history in 2014 when “I Can Only Imagine” surpassed 2 million digital downloads, making it the first song in Christian music to go platinum and double-platinum in the digital domain.

One of the best ways to experience every weekend of the Food & Wine Festival is with a Fun Card, where guests can pay for a day admission and come back all year. For a limited time, guests who buy a 2016 Fun Card to Busch Gardens also will receive a FREE 2016 Adventure Island® Fun Card. Offer expires March 31, 2016.

In addition to chart-topping concerts, this year Busch Gardens Tampa Bay has added more ways to savor the festival including:

SPECIAL PACKAGES:
·         Food & Wine Festival Priority Seating – Priority Seating is available for each concert date. Reservations start at $34.99
·         Beer, Wine & Food Samplers – Guests with exclusive interests in culinary offerings can purchase Beer, Wine & Food Samplers starting at $24.99.
·         Wine by the Bottle – Guests can take home a part of the Food & Wine Festival with wine available for purchase by the bottle in select gift shops, including Xcursions, Nature’s Kingdom and the Painted Camel Bazaar.


The Festival features 11 different culinary cabins that guests can experience throughout the park, each with its own special menu including two new cabins, Artisan Eats and the Garden Gate Café. The Festival menu features more than 35 delectable dishes designed specifically for the event with more than 15 all-new dishes, including duck tacos, lobster ravioli, truffle fries and almond coconut truffles. Plus, Festival classics like bacon mac & cheese and the griddled cheese cake sandwich are back by popular demand.
Be the first to know about new events, special deals and future announcements by following the park’s blog at BuschGardensTampaBlog.com, or “Like” the Busch Gardens Facebook page, and follow @buschgardens on Twitter and Instagram.
Publicadas por Axel a la/s 2:06:00 p. m.