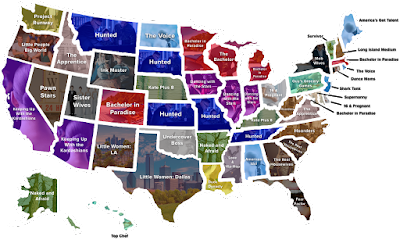 Whether you love cutthroat competition, regular people becoming overnight celebrities, or ridiculously scripted drama, reality TV has something for you. But how do your reality TV interests compare to people in your state and across the US?

The team at CableTV.com has released their second annual report on each state's favorite reality TV show. their analysts scoured search results for the most popular reality shows on television to find out which show each state is most obsessed with this year. Compared to our 2016 data, 2017 has a wider variety of shows. Last year, Hoarders and Project Runway were the big winners, with Shark Tank, The Apprentice, and The Bachelor close behind. This year, Hunted and Bachelor in Paradise were the only standout favorites.We all have our guilty pleasure shows on TV. Do you know what reality show your state is secretly watching behind closed doors?