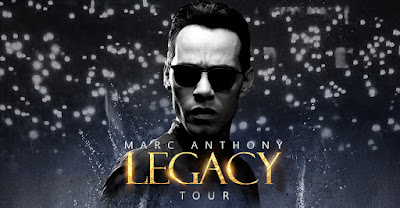 Latin salsa superstar, Marc Anthony today announced new dates for his Legacy Tour. Anthony will take fans on a journey through his award-winning musical catalogue like never before by performing some of his personal favorites. Anthony’s tour begins on October 24 in Boston and concludes on February 23 in Uniondale, NY. Anthony returns to Orlando’s Amway Center for his eighth record-setting appearance on Sunday, January 27, 2019. Tickets go on sale to the general public on Friday, October 19 at 10 a.m.

The Legacy Tour is part of the historic concert tour agreement by Cárdenas Marketing Network (CMN) and Magnus Talent Agency (MTA). Under the $160 million agreement, CMN will serve as Anthony's exclusive concert promoter in the United States, Central America, South America and the Caribbean, covering several touring cycles. In Europe, CMN and MTA will co-promote concerts, whereas, CMN will exclusively represent the artist's live performances.

Anthony is one of the most influential artists of his time and a true ambassador of Latin music and culture. He has had 25 Billboard chart hits, sold over 12 million albums worldwide and has been recognized with countless standard gold and platinum certifications from the Recording Industry Association of America (RIAA). In 2012, the two-time Grammy Award and five-time Latin Grammy Award-winner launched the Maestro Cares Foundation, hosting a series of fundraisers throughout the year to benefit the non-profit organization and build orphanages in Latin America. Anthony has also established a highly credible acting résumé. His 11th studio album titled, “Marc Anthony 3.0,” received an American Music Award; a Grammy Award nomination; five Premios Lo Nuestro; two Premios Juventud; 10 Billboard Latin Music Awards; three Billboard Awards and a special recognition from Univisión television network. In 2013, “Vivir Mi Vida” topped Billboard’s Latin Songs chart for 18 straight weeks, making it the longest-running number one salsa single of all time. “Vivir Mi Vida” also received the Latin Grammy ® for Record of the Year, his Vivir Mi Vida World Tour was included in Pollstar’s top-selling tours of 2013 and was extended to May 2014, and received a Premio Juventud for Super Tour of the Year. In 2016, Anthony was honored as the Person of the Year by the Latin Recording Academy for his musical contributions and philanthropic work. In addition to his music and acting accomplishments, Anthony also has his own clothing and accessories line for Kohl’s and he is a minority owner of the Miami Dolphins NFL franchise.
Publicadas por Axel a la/s 7:55:00 a. m.