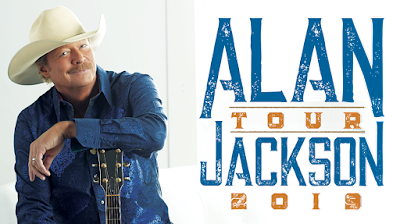 Country Music Hall of Famer Alan Jackson makes his first visit to Orlando in over 20 years and brings his greatest hits for one night only. Jackson plays Orlando’s Amway Center on Friday, September 20 and joining him as special guest is newcomer, William Michael Morgan. Tickets go on sale this Friday, February 1 at 10 a.m. EST.

The following pre-sale opportunities are available Orlando Venues All Access members may purchase tickets during the pre-sale on Thursday, January 31, 10 a.m. – 10 p.m. EST. Jackson is teaming up with CID Entertainment to offer V.I.P. experiences during select tour dates. Fans may choose from a variety of packages that have been designed with their own unique benefits including a backstage tour, an opportunity to watch the show from the soundboard in a custom barstool, access to a pre-show party, autographed merchandise and more. Visit www.CIDEntertainment.com to purchase your V.I.P. package(s).

Since arriving on the music scene in 1989, Jackson has been celebrating and telling real-life stories. His collection of hits composed over three decades have earned him legions of longtime fans and it has also garnered the admiration of younger generations. Jackson’s repertoire has stood the test of time; it has impacted a field of artists who cite him as an influence and his music has earned him a place alongside music’s greatest names, cementing his place in its history with membership in the Country Music Hall of Fame (2017) and the Songwriters Hall of Fame (2018). Jackson’s membership among music’s all-time greats is part of a long line of career-defining accolades that include three Country Music Award (CMA) Entertainer of the Year honors, more than 25 years of membership in the Grand Ole Opry, a 2016 Billboard ranking on the Top 10 Country Artists of All-Time chart, induction to the Nashville Songwriters Hall of Fame, and the Heritage Award as the most-performed country songwriter-artist of the American Society of Composers, Authors and Publishers’ (ASCAP) first 100 years.

With nearly 60-million albums sold worldwide, Jackson ranks as one of the 10 best-selling male vocalists of all-time among all genres. He has released more than 60 singles – registering 50 Top 10 hits and 35 number ones (including 26 Billboard chart-toppers). With an unrivaled catalog of songs, Jackson will play the songs his fans have longed to hear, from his debut hit, “Here in the Real World,” signature songs, “Chattahoochee,” “Drive” and “Gone Country,” and party anthems, “It’s Five O’Clock Somewhere,” “Good Time” and many more.

The chart-topping hit, “I Met a Girl,” put Morgan on the map, and his talent, music and voice are keeping him there. A timeless sound and honest lyrics landed him a major label record deal at 19 years old, gave him that number one gold-smash hit and earned him a top five debut album. A few years older – and hundreds of shows wiser, Morgan’s music embodies the man he’s become ­– a hard worker and big dreamer, single dad and hopeless romantic and a pure country stalwart unafraid to embrace the here and now.