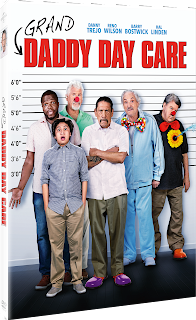 AVAILABLE ON DVD AND DIGITAL FEBRUARY 5, 2019

A hilarious comedy for the whole  family to enjoy, Grand-Daddy Day Care arrives on DVD, Digital and On Demand February 5th, 2019 from Revolution Studios, a subsidiary of Content Partners, and Universal 1440, the original content production arm of Universal Pictures Home Entertainment.

When Frank Collins (Reno Wilson) suffers from writer’s block, he decides to start a day care for his father-in-law (Danny Trejo) and other seniors as a way to make quick cash, while giving him time to still work on his next book. Eventually getting a small group to care for, Frank soon learns that these are not your typical seniors and they can’t be easily corralled. With a code enforcement officer challenging the legality of his business, and his senior charges getting into all kinds of trouble, Frank’s work days become anything but effortless. Featuring an all-star cast of TV’s greatest stars, Grand-Daddy Day Care is a hilarious story for the young, and the young at heart.

Grand-Daddy Day Care will be available on DVD and Digital.