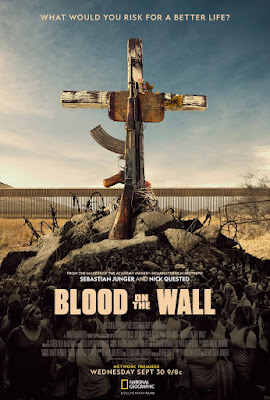 BLOOD ON THE WALL Is Second Project from National Geographic and Filmmakers Junger and Quested, Following 2017 duPont-Winning Hell on Earth: The Fall of Syria and the Rise of ISIS

With the trademark inside access unique to National Geographic and the filmmakers, BLOOD ON THE WALL  explores the internal and external influences on Mexico as it deals with the key issues of migrant caravans from Central America heading to the U.S., the dangerous but resilient traffickers fueling the cross-border drug trade and how corruption has impacted politics at every level.

Featuring unprecedented first-person accounts from migrants on the road, farmers, narcos, security enforcers, journalists, presidents and diplomats, BLOOD ON THE WALL tells the story of how traffickers, corrupt politicians and well-positioned business interests have seized wealth and power, leaving everyday citizens desperately fighting for survival or needing to flee elsewhere for a better life. Exploring Mexico’s tension with its northern neighbor and the way regional U.S. policies over the past few decades have helped fragment Mexico’s political order, the film looks at the ways in which the country has been weighed down by disorder and crime throughout the 21st century.

BLOOD ON THE WALL Closely following a caravan of migrants some with young children as they travel from Honduras, Guatemala and other Central American nations across Mexico toward the United States, the film depicts the daily struggles of life on the road without certainty of a better future. The border these migrants are seeking to be granted entry to is the very same that narco-traffickers cross regularly as they move drugs and money back and forth between Mexico and the U.S. “The issues Mexico faces right now are layered and complex and ultimately intertwined with how the U.S. has approached foreign policy and immigration since the Reagan era.

The history and the future of the country and its inhabitants is so bound up in the larger forces at work in the region, it’s vital to look at them holistically. We’re reaching a juncture in this election year when understanding the socio-political landscape of our neighbors is incredibly important for people before going into a voting booth,” said director Sebastian Junger. “Systemic change is top of mind for a lot of people right now and that conversation needs to include U.S. foreign policies that only enhance the inequities across our southern border, allowing ruthless leaders and cartels to take advantage of people for their personal gain. Humans are remarkably resilient, but when you disenfranchise them, taking away their peace and stability, it can leave them in a very desperate situation.

Anonymous drug runners based on the southern U.S. border. BLOOD ON THE WALL is National Geographic’s second collaboration with filmmakers and producing partners Junger and Quested following the 2017 duPont-winning feature documentary Hell on Earth: The Fall of Syria and the Rise of Isis. BLOOD ON THE WALL The announcement follows the success of National Geographic Documentary Films’ The Cave from Feras Fayyad, which was nominated for a 2020 Academy Award®.

The banner previously released the Oscar, BAFTA and seven-time Emmy Award® winner Free Solo; the Sundance Audience Award-winning docs Sea of Shadows and Science Fair; Emmy®-winning films LA 92 (also produced by Lightbox) and Jane, both of which were included in the top 15 documentaries considered for an Academy Award® in 2017; and duPont-Columbia Award-winning documentary Hell on Earth.


About Sebastian Junger
Sebastian Junger is the New York Times No. 1 best-selling author of “The Perfect Storm,” “Fire,” “A Death in Belmont,” “War” and “Tribe.” As an award-winning journalist, a contributing editor to Vanity Fair and a special correspondent at ABC News, he has covered major international news stories around the world and has received both a National Magazine Award and a Peabody Award. Junger is also a documentary filmmaker whose debut film, “Restrepo,” a feature-length documentary co-directed with Tim Hetherington, was nominated for an Academy Award and won the Grand Jury Prize at Sundance.

About Nick Quested
Nick Quested is executive director and owner of Goldcrest Films, where he has built one of the world’s premiere documentary brands and won two Emmy® Awards for his work. Quested has produced over 35 films, including Sebastian Junger’s “The Last Patrol,” “Korengal,” the PGA- and two-time Emmy-nominated “Which Way Is the Front Line From Here? The Life and Time of Tim Hetherington” and the Oscar®-nominated “Restrepo.” Quested is also an award-winning music video director who has worked with such artists as Dr. Dre, Nas, Puffy, Sting, Master P, Cash Money and Trick Daddy.