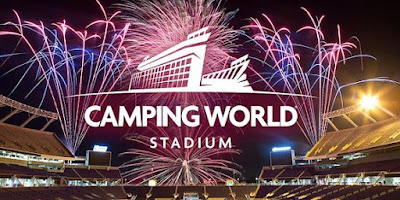 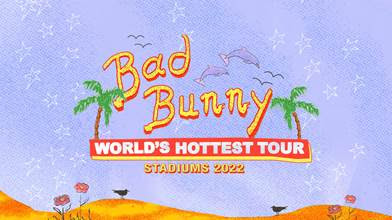 ORLANDO, FLORIDA [January 24, 2022] - Proclaimed by Spotify as the most listened-to artist in the world consecutively since 2020, Bad Bunny has distinguished himself for his revolutionary moves that constantly impact the music industry. Today, the multi-award-winning artist adds a new milestone to his career, announcing his first stadium tour, Bad Bunny: World's Hottest Tour, traversing the United States and Latin America. Promoted by Live Nation and Cardenas Marketing Network (CMN) in the U.S., the 29-date stadium tour kicks off on Friday, August 5, at Orlando's Camping World Stadium and marks the first time a Latin artist has headlined a show at the stadium. Tickets go on sale to the general public on Friday, January 28 at 12 p.m. E.T.

Joining Bad Bunny as special guest on select dates in the U.S. will be GRAMMY®-nominated D.J. and record producer Alesso and 10-time GRAMMY®-nominated artist Diplo. With his music and visuals, Alesso creates experiences that have defined him as one of the most-celebrated live performers. Diplo is one of the most dynamic forces in music today, with billions of streams on some of the world's best dance recordings.

This stadium tour announcement epitomizes Bad Bunny's prolific growth as a global superstar. During the on-sale for his El Último Tour Del Mundo 2022, he broke Ticketmaster's record for the most tickets sold for first-day sales since 2018. Bad Bunny instantly sold out all 35 shows, moving more than 500,000 tickets. The El Último Tour Del Mundo 2022 tour kicks off on February 9 and plays 35 arenas across North America. Additionally, the artist performed his first stadium concerts in December 2021, breaking audience records with two performances at the Hiram Bithorn Stadium in Puerto Rico. His stadium tour, with all-new production, will only transcend his status as a performer to another stratosphere.

Bad Bunny also ranked number one on the Billboard Top Latin Artists charts for a third consecutive year and was also named one of the Top 10 most popular global superstars. Additionally, he is also the highest-ranking Latin act on Billboard's all-genre Top Artists chart, positioned at number 16, and is the artist with the most hits to reach the Top 10 of the Hot Latin Songs chart since the chart’s inception.

Adding to his musical achievement in 2021, the artist finished the year by surprising his fans with the premiere of "Te Deseo Lo Mejor," a collaborative production with "The Simpsons." The award-winning series is known for bringing celebrities to life in animated form. Bad Bunny plays Cupid and brings together a fighting Homer and Marge in the reggaeton superstar's video for "Te Deseo Lo Mejor."

CMN is the authority in Latin entertainment. As a multicultural creative agency, our common goal is to create and build unique experiences between fans, artists and brands. Henry Cárdenas, entrepreneur, philanthropist and founder of CMN, is a pioneer in bringing Latin entertainment and live sports events to the United States. The Chicago-based company with offices in Miami and Houston operates through professionals constantly creating cutting-edge marketing experiences and producing the best events in the country.  To learn more about CMN and its roster of artists, visit www.cmnevents.com or follow us at @cmnevents.