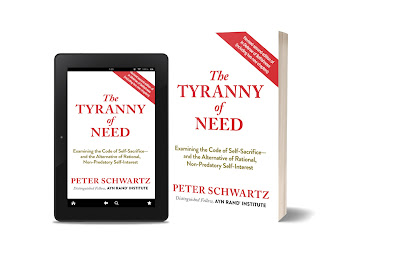 What if the reason behind the burgeoning swell of social conflict is not the absence of altruism, but rather, its overwhelming presence? Philosopher and retired Chairman of the Board of the Ayn Rand Institute Peter Schwartz masterfully challenges the widely held notion that self-sacrifice is a virtue and makes a compelling case for the pursuit of what he calls “rational self-interest” in his provocative book, The Tyranny of Need: Examining the Code of Self-Sacrifice—and the Alternative of Rational, Non-Predatory Self-Interest.

Is the pursuit of individual happiness moral? What does it mean to be “rationally selfish”? And is it possible to remain committed to moral principles without sacrificing yourself to others?

In his thought-provoking exploration into society’s beliefs about altruism and self-sacrifice, philosopher and author Peter Schwartz offers readers the means by which they can uphold, guilt-free, the moral right to pursue their own happiness.

“From childhood, we’re taught that helping others is the essence of morality. We’re told that acting to benefit someone else is praiseworthy, but acting to benefit yourself is not,” Schwartz says. “And most people take this code of ethics for granted. They may not always abide by it, but they don’t doubt its validity. They don’t challenge the premise that to live ethically is to live altruistically. This book challenges it.”

In The Tyranny of Need: Examining the Code of Self-Sacrifice—and the Alternative of Rational, Non-Predatory Self-Interest, Schwartz posits that most people do not fully understand that altruism demands that you subordinate yourself to others, elevate their desires above your own, sacrifice your own interests to serve them and regard another’s need as a claim against you.

To which, Schwartz simply asks, “Why? Why should you be called upon to suffer so that your neighbor might benefit? Why does the fact that someone needs your money somehow create a moral entitlement to it, while the fact that you’ve earned it does not? There is no logical justification for such ethics. Why, then, must you allow yourself to be ruled by this tyranny of need?”

Schwartz goes on to present a moral alternative to the code of altruism: rational self-interest. He explains why genuine selfishness is not exemplified by the conniving duplicity of a Bernie Madoff. Or by the brutal plundering of an Attila the Hun. Or by the mindless do-whatever-you-feel-like-doing lifestyle of a hedonist. Such people are actually acting against their interests. Instead, Schwartz argues, the truly selfish individual is committed to moral principles. He lives an honest, productive, self-respecting life. He renounces the unearned and deals with people by giving them value for value, to mutual benefit, neither sacrificing himself to others nor others to himself.

Peter Schwartz is a retired Chairman of the Board of the Ayn Rand Institute—the pre-eminent organization for the dissemination of Ayn Rand’s ideas—and is now a Distinguished Fellow there. He was the founding editor and publisher of The Intellectual Activist (1979-1991), a periodical that covered political-social developments from a pro-individual-rights orientation.

He is also the author of Libertarianism: The Perversion of Liberty and The Foreign Policy of Self-Interest: A Moral Ideal for America; editor and contributing author of Ayn Rand’s Return of the Primitive: The Anti-Industrial Revolution; and co-editor of Objectively Speaking: Ayn Rand Interviewed. His articles have been published in Washington Post, Forbes, Huffington Post and The Hill.

The Tyranny of Need: Examining the Code of Self-Sacrifice—and the Alternative of Rational, Non-Predatory Self-Interest
Publisher: Ayn Rand Institute Press