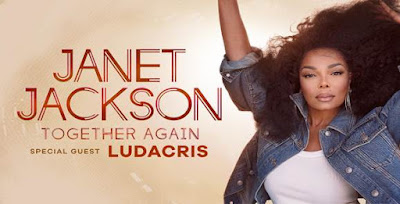 ORLANDO, FLORIDA [December, 2022] - Five-time GRAMMY®️ Award-winning Rock and Roll Hall of Fame®️ inductee, Janet Jackson, today announced her highly-anticipated return to the road after four years with, Together Again, her ninth touring venture. Produced by Live Nation, the 33-city tour kicks off in Hollywood, FL on Friday, April 14 and concludes in Seattle, WA on Wednesday, June 21. In addition, three-time GRAMMY® Award-winning recording artist and “Fast and Furious” actor, Ludacris, joins Jackson as a special guest across all dates. Jackson returns to Orlando’s Amway Center on Wednesday, April 19, 2023. Tickets go on sale to the general public on Friday, December 16 at 11 a.m. ET.

The Together Again Tour will offer fans the long-awaited chance to reunite with Jackson in celebration of her 50th anniversary in entertainment and spotlight the milestones for two of Jackson’s most critically-acclaimed albums—25 years of “The Velvet Rope” and “20 Years of Janet,” featuring her biggest chart-topping hits plus new music.

Citi is the official card of the Together Again Tour. Citi card members have access to pre-sale tickets beginning Tuesday, December 13 beginning at 11 a.m. ET until Thursday, December 15 at 10 p.m. ET through the Citi Entertainment program. For complete pre-sale details, visit www.citientertainment.com.

Jackson is one of the most influential entertainers of the modern era. Her music has won her five GRAMMY® Awards, two Emmy® Awards, a Golden Globe® Award, a nomination for an Academy Award®, and dozens of American Music Awards, MTV Video Music Awards and Billboard Music Awards. She has received accolades as an actress, including the National Association for the Advancement of Colored People (NAACP) Best Supporting Actor award. Jackson is a published author, dancer, entrepreneur, philanthropist and one of the biggest-selling artists in music history.

With sales of over 180 million records worldwide, Jackson reigns as one of the best-selling artists of all time with a string of hits which have left an indelible impression on pop culture. Her Rhythm Nation World Tour (1990) holds the record for the biggest-selling debut tour in history and she is the first woman to debut in the Top 10 of the Hot 100 charts. She also stands as one of only four artists to earn a number-one album for four successive decades alongside Barbra Streisand, Bruce Springsteen and U2.

In 2018, her single, “Made for Now” with Daddy Yankee, released by her own Rhythm Nation Records, hit number one on the Dance Clubs Songs chart making it her 20th single on the chart in the span of her career. In 2019, she was inducted the Rock and Roll Hall of Fame alongside her brothers and in the same year her critically-acclaimed Las Vegas residency, “Metamorphosis,” closed to record-breaking ticket sales with only 18 dates at the Park Theater at MGM Park. As reported by Billboard Boxscore, the legendary singer, dancer, songwriter, producer and actress is among the biggest Vegas performers of this decade, ahead of Celine Dion (2011), Britney Spears (2013) and the Backstreet Boys (2017). Her critically- acclaimed and award-winning documentary “Janet Jackson” amassed over 20 million viewers in one week.

On February 4, 2021, Jackson’s iconic mega platinum-selling third album, “Control,” turned 35. The album also returned to the top of the charts, hitting number one on the Apple Top 40 U.S. Pop Album chart. Led by five chart-busting hit singles—“What Have You Done for Me Lately,” “Nasty,” “Control,” “When I Think Of You,”—with their complementary, tightly-choreographed music videos—and “Let’s Wait Awhile,” “Control” became Jackson’s first number one pop album. The album also made Billboard chart history for having the longest continuous run on the Hot 100 with singles from one album, ultimately tallying a remarkable 65 consecutive weeks from that perch. “Control” has sold more than 10 million copies worldwide.

The career of the multi-talented Chris “Ludacris” Bridges can best be described as remarkable. As a recording artist, his nine studio albums have produced 56 songs on the Billboard 100 chart, including 18 top hits and five number-one singles. He has sold more than 24 million albums worldwide, due to the blockbuster success of such singles as “Stand Up,” “Get Back,” “Southern Hospitality,” “Number One Spot,” “Money Maker” and “My Chick Bad.” All of these records were accompanied by ingenious videos showcasing Ludacris’ far-reaching imagination, and his willingness to stretch the boundaries and creating the blueprint for rap video production.

With an unrivaled match of lyrical acumen, wit and imagery, Ludacris has solidified himself as one of music's premier entertainers. His versatility and artistic complexity also enabled him to make a seamless transition to acting, including the fan-favorite role of "Tej" in Universal Pictures’ box office phenomenon “Fast & Furious” franchise where he was introduced for the first time in 2003 in “2 Fast 2 Furious.”  He will reprise his role of “Tej” for the seventh time in “Fast X,” which is set to release on May 20, 2023.

As a father of four girls, his latest ventures fittingly include launching his educational platform devoted to the enrichment of children called "KidNation.”  In addition, Ludacris created the animated series, “Karma’s World,” which launched in the Top 10 in 42 countries on Netflix, received two NAACP Award nominations and is already in its fourth season.  The series for children ages 6-9 is a coming-of-age story about a young black girl finding her voice and using it to change her world—originally inspired by his oldest daughter, Karma, and based on the interactive educational website of the same name created by Karma’s World Entertainment in 2009.

A consummate businessman, Ludacris is enjoying success outside of entertainment. One of his most successful ventures includes opening his long-anticipated restaurant “Chicken-n-Beer” at the Hartsfield-Jackson Atlanta Airport with a new location opening at the Los Angeles International Airport (LAX) in 2023.

Additionally, Ludacris’ philanthropic efforts rival his entertainment accomplishments. He began The Ludacris Foundation in 2001, which focuses on helping the youth in his hometown of Atlanta and has partnered with No Kid Hungry and Feeding America.