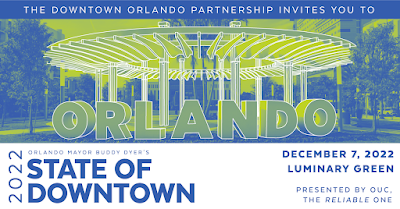 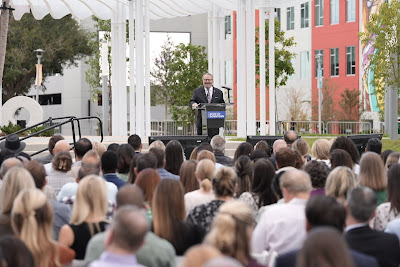 ORLANDO, FL – December 7, 2022 - Today, Orlando Mayor Buddy Dyer delivered his annual State of Downtown address to hundreds of downtown residents, business owners, professionals, and community members in partnership with the Downtown Orlando Partnership. Hosted at Luminary Green Park at Creative Village, Dyer’s speech highlighted downtown’s most recent reinvention, 68-acres of surface parking and an empty, aging arena transformed into a “city-within-a-city" that today, is unlocking education and opportunity for all, housing headquarter technology and innovation companies, growing local startups and entrepreneurs, and serving as a true neighborhood with housing, park space and amenities for everyone.

“Decade after decade; resilience, reinvention and rebirth have defined Orlando,” said Orlando Mayor Buddy Dyer. “[And today] Downtown Orlando is the focal point of the oncoming wave of reinvention.”

Highlighting that reinvention with the growing, innovation economy being cultivated in downtown and at the Creative Village, with this speech, Dyer became the first mayor in the world to simulcast a mayoral address live in the metaverse. At the in-person event his “avatar” image was shown on the digital screen on the outside of the Electronic Arts building to represent this momentous occasion. 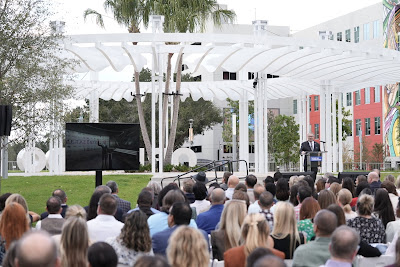 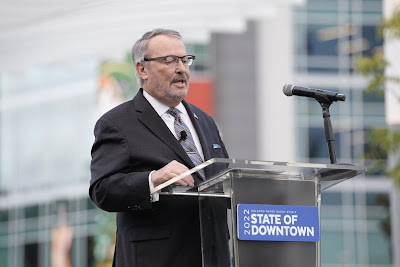 The mayor highlighted how showcasing the speech in the metaverse was made possible thanks to local technology workers and companies located here, declaring “Orlando is the MetaCenter of the metaverse.” The metaverse is the virtual world in which people can work, shop and interact with others, all from the comfort of the physical world. And Mayor Dyer made a call for tech professionals to come be a part of what is happening here in creating that next generation economy. “Consider this your personal invitation from the Mayor of Orlando,” said Dyer. “We want you to share in what we’re building here in the metacenter. We want you in Orlando.”

As part of his speech, Dyer also pointed out that to continue to attract these high-wage jobs and innovative companies today and into the future, downtown’s evolution into a true neighborhood is more important than ever. To accomplish this, he touched on the work the city is doing as part of the DTO 2.0 initiative. The initiative, currently underway, will result in specific, implementable strategies to further improve downtown, block by block, through smart and strategic infrastructure investments.

“We’re fortunate to have built a strong foundation and now it’s time to take the next steps,” said Mayor Dyer. “DTO 2.0 is an action plan for enacting dozens of small steps that add up to one big evolution of downtown Orlando as its own urban neighborhood.”

Mayor Dyer also noted, “Bringing our vision of an urban neighborhood to life means continuing to take care of our most vulnerable neighbors.” In the speech, Mayor Dyer recommitted to continue to create opportunities for job-training and services for the unsheltered; and increase housing stock, including affordable, attainable and market-rate multifamily options. Efforts highlighted included:

Ending the speech, Mayor Dyer reflected that the reinvention and rebirth of downtown won’t continue to happen by itself, but just as in the past, it would take the partnership and collaboration the Orlando community is known for.

“Thank you all for being here today in person, on social media and now in the metaverse,” said Dyer.  “I hope each of you feels the same sense of momentum that I do as we work together to unlock prosperity for everyone.”