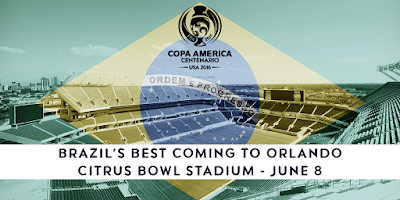 
Five-time FIFA World Cup champion Brazil will stop in Central Florida on June 8 during their Copa America Centenario 2016 campaign. The full schedule of the once-in-a-lifetime event that will honor 100 years of history and will feature some of the world’s best players and teams was also released earlier today, and the City Beautiful will host three group-stage matches in the 16-nation tourney – June 4, 6 and 8.

The oldest international soccer tournament in the world will take place across 10 U.S. venues June 3-26.  Tickets for this event go on pre-sale to Orlando City, Orlando Pride and Orlando City B season ticket holders, along with members of other sports-related organizations in January.  Fans may visit www.CA2016.com for more information. Additional ticketing information will be released in the coming weeks.

“June will be an historic month for world class soccer in Central Florida with the kickoff of Copa America and specifically, the Brazilian National Team here in the City Beautiful,” said City of Orlando Mayor Buddy Dyer. “We invite all soccer and sports fans, whose outpouring of support helped us secure these events, to join us at the Orlando Citrus Bowl for this once-in-a-lifetime experience.”

Orlando City SC, the Central Florida Sports Commission, City of Orlando and Orange County Government worked in partnership to bring the prestigious Latin American championship to the Orlando Citrus Bowl and to Central Florida, for the first time in its history.  Additionally, partnerships with Florida Citrus Sports, tourism leaders and the local business community were integral in securing the event.

“Hosting the Copa America Centenario at the Orlando Citrus Bowl is a great example of what our community can accomplish when we come together for a common goal," said Orange County Mayor Teresa Jacobs. “This incredible sporting event will not only offer exciting opportunities for our residents, but will draw thousands of people from across the world, benefiting our local economy. The tournament is expected to draw more than 40,000 room nights and $30 million in economic impact to Orange County - precisely why Orange County has allocated $475,000 to help host the Copa America Centenario.”

“The announcement that Brazil will be an anchor team in Orlando could not be better news for our community,” said Central Florida Sports Commission President and CEO John Bisignano. “Brazilian tourists are a key demographic to our area, but it’s the country’s spirit and passion for the game of soccer that will make Copa matches at the Orlando Citrus Bowl that much more special.”

This year’s Copa America marks the first time this premier event has been staged outside of South America, featuring the top stars from the Confederación Sudamericana de Fútbol (CONMEBOL) and the Confederation of North, Central America and Caribbean Association Football (CONCACAF) regions.

The final two teams from CONCACAF will be determined in a double-header playoff set to be disputed January 8, 2016, in Panama City.  Trinidad and Tobago will face Haiti, and Panama squares off against Cuba with the winners qualifying for the Copa America Centenario.