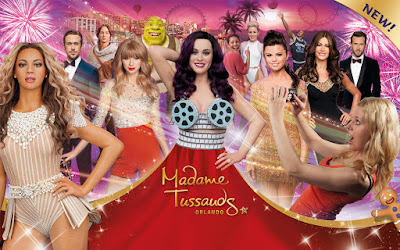 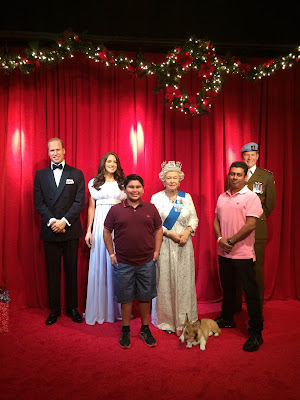 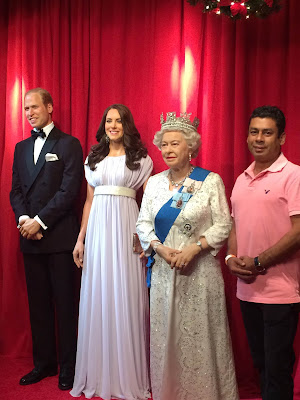 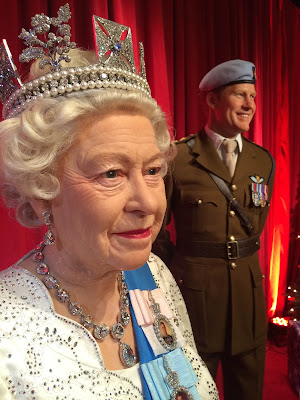 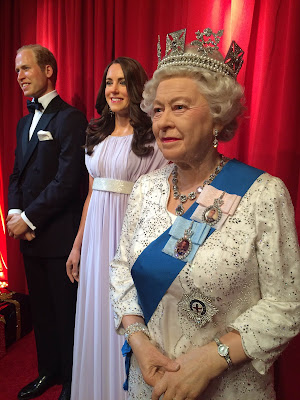 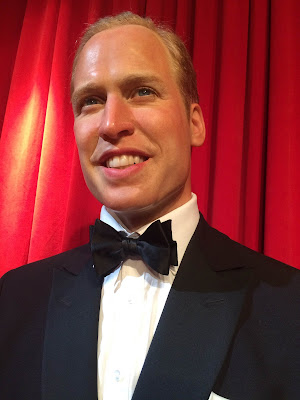 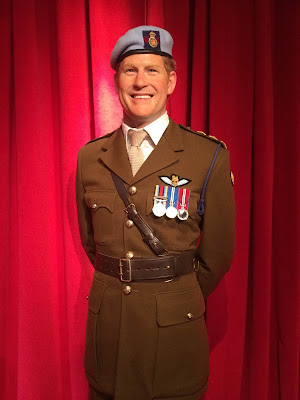 The wax figures of Queen Elizabeth, Prince Harry and the Duke and Duchess of Cambridge arrive in Orlando

Madame Tussauds Orlando is providing a royal welcome for the arrival of its newest figures of Queen Elizabeth, Prince Harry, Prince William and Duchess Catherine. Britain’s royal family will be featured in the Orlando attraction in a special holiday-themed set for a limited time. Guests are encouraged to get up close and personal with royalty and snap their best selfies for a memorable holiday card.

Queen Elizabeth’s wax figure is fitted in an exact replica of the dress she wore for her official Diamond Jubilee portrait. Madame Tussauds studio artists were invited to the Palace to obtain exact measurements, photos and detailed notes of the dress. It is embellished with approximately 10,000 Swarovski crystals, and took artists over 60 hours to complete. Her jewelry is handmade and includes the George IV State Diadem, the Garter Star, the Garter Badge, the insignia of the Royal Order of George V and George VI, and Colette necklace and earrings.

Prince Harry’s figure is dressed in a Dege & Skinner suit from Savile Row -- created by the actual tailor he uses for his uniforms. Prince Harry is adorned with medals: a set of three Court-Mounted full-size medals, three pairs of gilt and enamel Garter Stars, and one pair of Flying Wings.

Duchess Catherine’s figure is styled after her look at the 2011 BAFTA Awards in a one-of-a-kind pale lilac Alexander McQueen gown. Prince William is in a double-breasted six button two-piece dinner suit specially made for Madame Tussauds by Gieves & Hawkes.

Madame Tussauds enjoys a close relationship with the British Royal Family dating back to William IV, King of England when the attraction first opened in London in 1835. Their Highnesses have been closely involved with the royal figures. Madame Tussauds originally began as a traveling exhibit before establishing a permanent home in London and ultimately expanding to 19 attractions worldwide.

Guests at Madame Tussauds Orlando will experience the essence of America with this brand new, immersive and interactive wax experience, bursting with family fun and world-class entertainment, as they move through themed areas meeting all of their favorite stars from award-winning film actors, to historical and modern world leaders, sports stars, music legends as well as figures important to Florida. All visitors can shake hands with the president, get on stage with rock stars and pop princesses, or get up close and personal with a Hollywood heartthrob and take the ultimate selfie! For more information, visit www.madametussauds.com/orlando.

Madame Tussauds Orlando is now open at I-Drive 360 on Orlando’s International Drive.
·  Madame Tussauds Studios London has been making wax figures for over 150 years. Each masterpiece takes four months, and a team of 20 dedicated sculptors, to create.  Over 300 precise body measurements are referenced, real head hairs are inserted one by one, and countless layers of paints and tints are applied to build up skin tones - all to achieve the kind of astonishing realism that has kept Madame Tussauds world renowned for over two centuries.
·       Madame Tussauds has attractions in London, New York, Amsterdam, Las Vegas, Shanghai, Hong Kong, Bangkok, Washington DC, Berlin, Hollywood, Vienna, Sydney, Tokyo, Blackpool, Wuhan, Beijing and San Francisco and Orlando