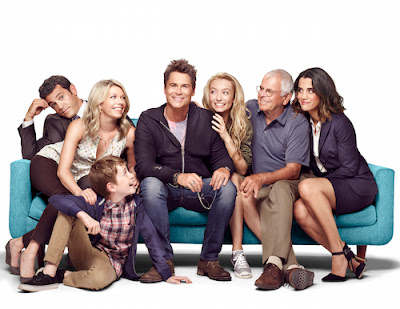 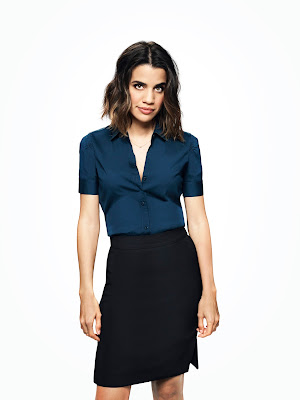 Starring Emmy Award nominee Rob Lowe (“Parks and Recreation,” “The West Wing”) and Emmy Award and Golden Globe Award nominee Fred Savage (“The Wonder Years”), THE GRINDER is a new comedy about two brothers: one a spotlight-grabbing actor who plays TV’s most popular lawyer and the other, a real-life, small-town attorney who has yet to find his spotlight.

DEAN SANDERSON, JR. (Lowe) spent eight seasons playing the title role on the hit legal drama “The Grinder.” When his series ends, he decides to move back to his hometown of Boise, Idaho, where his brother, STEWART (Savage), is poised to take over the family law firm. Despite having no law degree, no license to practice and no experience in an actual courtroom, Dean’s charisma and flair for the dramatic make him absolutely certain he has something to contribute to the firm. As Dean puts it, “Let’s say you’re at a restaurant and Noah Wyle is two tables down. You go into cardiac arrest. You don’t think Noah Wyle could step in and help?” It doesn’t take long for Dean to start inserting himself into every aspect of Stewart’s life, both in the courtroom and at home, and all to the amusement of Stewart’s wife, DEBBIE (Mary Elizabeth Ellis, “It’s Always Sunny in Philadelphia”); their two kids, 15-year-old LIZZIE (Hana Hayes, “Bucket and Skinner’s Epic Adventures”) and 13-year-old ETHAN (Connor Kalopsis, “Days Of Our Lives”); Dean and Stewart’s father, the law firm’s head, DEAN SR. (William Devane, “24: Live Another Day”) and the office’s tough-to-impress counselor, CLAIRE (Natalie Morales (“Parks and Recreation”), who remains unfazed by Dean’s celebrity.

Dean and Stewart don’t see to eye to eye, but when they stop arguing with each other and start arguing together in court…they make a formidable team.THE GRINDER is the story of two brothers, who took different paths, but meet again in the middle – for justice…sort of.

THE GRINDER is produced by 20th Century Fox Television. The series is created and written by Andrew Mogel and Jarrad Paul (“The D Train,” “Allen Gregory”). The series is executive-produced by Mogel, Paul, Nicholas Stoller (“Neighbors,” “Forgetting Sarah Marshall”), Greg Malins (“Friends,” “How I Met Your Mother”), Melvin Mar (NEW GIRL, “Fresh Off the Boat”) and Rob Lowe. Jake Kasdan (NEW GIRL, “Fresh Off the Boat”) serves as both director and executive producer. “Like” THE GRINDER on Facebook at facebook.com/TheGrinderFOX. Follow the series on Twitter @TheGrinderFOX and join the conversation using #TheGrinder. See photos and videos on Instagram @TheGrinderFOX.

Natalie Morales is one of comedy’s rising stars. She co-starred on “Trophy Wife,” reprised her role as “Lucy” on the final season of “Parks and Recreation,” appeared in the most recent season of “Girls,” recurred on Aaron Sorkin’s “Newsroom” and was a series regular on “White Collar” and “The Middleman.”

She also directs and stars alongside Michaela Watkins, Martin Starr and Paget Brewster in the Funny or Die series, “James Joyce’s Love Letters.” On the big screen, Morales starred in the independent feature “Six Month Rule.” She played Drew Barrymore’s best friend in “Going the Distance,” and she was handpicked by Oliver Stone for a role in “Wall Street 2: Money Never Sleeps.”

When she isn’t in front of the camera, Morales directs and is currently in pre-production on the Buster Keaton-inspired feature film “The Jock.”