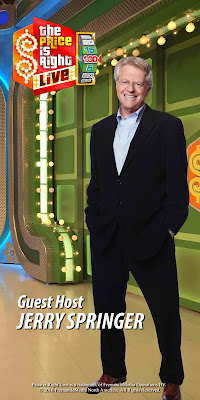 JERRY SPRINGER WILL HOST
THE PRICE IS RIGHT LIVE ™
AT DR. PHILLIPS CENTER FOR THE PERFORMING ARTS

Sunday, April 2, 2017 at 3:30 p.m. and 7:30 p.m.
Tickets on Sale Now
Limited tickets remain for 7:30 p.m. performance.
Jerry Springer, the host of the notorious television talk show that bears his name, will host the Orlando engagement of The Price is Right Live™. The live hit interactive stage show based on the longest-running game show in television history will play two shows at Dr. Phillips Center for the Performing Arts on Sunday, April 2, 2017 at 3:30 p.m. and 7:30 p.m. Both performances will take place in the Walt Disney Theater. Tickets are currently on sale and start at $36.50. Tickets may be purchased online at drphillipscenter.org, by calling 844.513.2014 or by visiting the Dr. Phillips Center Box Office at 445 S. Magnolia Avenue, Orlando, FL 32801 between 10 a.m. and 4 p.m. Monday through Friday, or 12 p.m. and 4 p.m. Saturday. Online and phone ticket purchases are subject to handling fees.

Springer comes to The Price is Right Live™ amidst the 25th anniversary of his talk show, “The Jerry Springer Show.” The host, a previous mayor of Cincinnati, brings a varied resume to the stage: Ohio politician, a former news anchor, political commentator, attorney and recording artist. As an entertainment personality, Springer has appeared on the radio, on Broadway, on film and even made his away across the dance floor on ABC’s “Dancing with the Stars.”

The Price is Right Live™ gives eligible individuals the chance to “come on down” and play classic games from television’s most popular game show. Contestants can win cash, appliances, vacations and possibly even a new car by playing favorites like Plinko™, Cliffhangers™, The Big Wheel™ and the fabulous Showcase.

Playing to near sold-out audiences for more than ten years, The Price is Right Live™ has given away over $12 million in cash prizes to lucky audience members across North America. This on-stage traveling version gives fans the chance to experience the same fun and winning excitement up-close and in-person.