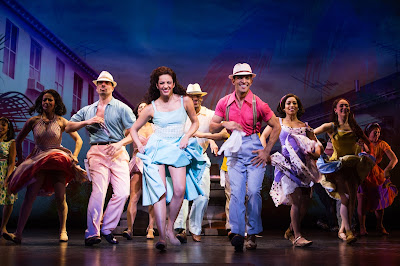 ON YOUR FEET!
The Emilio and Gloria Estefan Broadway Musical

“The very air in the room seems to vibrate in this
undeniably crowd-pleasing musical!” – The New York Times

The Dr. Phillips Center for the Performing Arts, Florida Theatrical Association and Broadway Across America announce that tickets are now available to the general public for the Orlando engagement of On Your Feet! The Emilio and Gloria Estefan Broadway Musical, part of the 2017 – 2018 FAIRWINDSBroadway in Orlando season.

From their humble beginnings in Cuba, Emilio and Gloria Estefan came to America and broke through all barriers to become a crossover sensation at the very top of the pop music world. But just when they thought they had it all, they almost lost everything.

From international superstardom to life-threatening tragedy, On Your Feet! takes you behind the music and inside the real story of this record-making and groundbreaking couple who, in the face of adversity, found a way to end up on their feet.

Directed by two-time Tony Award®-winner Jerry Mitchell (Kinky Boots), with choreography by Olivier Award-winner Sergio Trujillo (Jersey Boys) and an original book by Academy Award®-winner Alexander Dinelaris (“Birdman”), On Your Feet! features some of the most iconic songs of the past quarter-century – and one of the most inspiring stories in music history.

About the Dr. Phillips Center for the Performing Arts
Dr. Phillips Center for the Performing Arts is a nonprofit 501(c)3 organization operating the state-of-the-art performing arts center in downtown Orlando, Florida. With its opening in November 2014, the performing arts center launched its vision of Arts for Every Life by being a gathering place for creativity and discovery; a vibrant urban destination where artists, audiences and students come to experience, explore and learn. The two-block community destination features the 2,700-seat Walt Disney Theater, 300-seat Alexis & Jim Pugh Theater, Seneff Arts Plaza, Dr. Phillips Center Florida Hospital School of the Arts, the DeVos Family Room, and other event rental spaces. Future expansion includes Steinmetz Hall, a 1,700-seat acoustical theater, along with rehearsal, classroom, office space and commercial development spaces. Dr. Phillips Center is a private non-profit collaborating with the City of Orlando, Orange County, the City of Winter Park, the State of Florida and generous donors.

FAIRWINDS Broadway in Orlando is presented in partnership with Broadway Across America and Florida Theatrical Association. FTA is a non-profit civic organization with a volunteer board of trustees established to ensure the continued presentation of quality touring Broadway productions and the promotion of arts education throughout the state of Florida. For more information, visit FloridaTheatrical.org .

Broadway Across America is part of The John Gore Organization family of companies, which includes Broadway.com and The Broadway Channel.  Led by 9 time Tony-winning producer John Gore (Owner & CEO), BAA is the foremost presenter of first-class touring productions in North America, operating in 41 markets with over 270,000 subscribers. Current and past productions include Beautiful, Cats, Chicago, Dear Evan Hansen, Fiddler on the Roof, Finding Neverland, Million Dollar Quartet,Hairspray, On Your Feet!, School of Rock and The Producers. Broadway.com is the premier theater website for news, exclusive content and ticket sales. For more information please visit BroadwayAcrossAmerica.com and Broadway.com.
Publicadas por Axel a la/s 2:28:00 p. m.