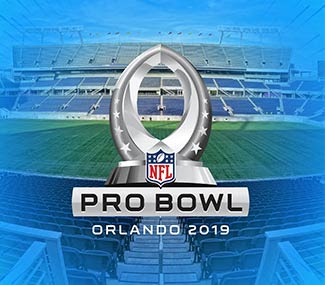 NFL Network to Reveal Player Selections on December 18
The Pro Bowl is back in Orlando! The National Football League’s (NFL) brightest stars are returning to Orlando’s Camping World Stadium for the 2019 Pro Bowl presented by Verizon on Sunday, January 27, 2019. Tickets to the game start at $45 and are now on sale via NFL.com/ProBowlOnSale.

With a start time of 3 p.m. EST, the 2019 Pro Bowl will be televised live on ESPN, ESPN Deportes, Disney XD and simulcast on ABC – the second time the game will be available on both broadcast and cable networks. Special group ticket packages, including access to VIP seating at Pro Bowl practices, are available by calling 646.688.5705.

Premium Pro Bowl packages, including VIP parties and hotel accommodations, may also be purchased through On Location Experiences (OLE), the NFL’s official source for event experiences and hospitality. For more information on Pro Bowl gameday and weekend packages, visit NFLOnLocation.com.

Pro Bowl players are determined by the consensus votes of fans, players and coaches. Each group’s vote counts one-third toward determining the 88 players who will be eligible for the game. Rosters for the game will be announced live on “NFL Total Access: Pro Bowl Players Revealed,” an NFL Network special airing on Tuesday, December 18 at 8 p.m. EST.

The month-long Pro Bowl voting period begins on Tuesday, November 13 and concludes on Thursday, December 13. Fans may vote online and via web-enabled mobile phones atNFL.com/ProBowlVote to help send their favorite players to the 2019 Pro Bowl.

NFL players and coaches will cast their votes on Friday, December 14. The NFL is the only sports league that combines voting by fans, coaches, and players to determine its All-Star teams, and it was the first professional sports league to offer online voting for such an event in 1995.

For the third consecutive year, the NFL will host Pro Bowl Week festivities across the Orlando area, bringing free experiences and activities to fans as well as an extraordinary number of events focused on commemorating all levels of football – from youth to high school to the NFL's best. Some of the Pro Bowl Week events will include:

·        Pro Bowl Experience: A free football festival located at the ESPN Wide World of Sports Complex at Walt Disney World® Resort, where fans can participate in immersive exhibits, take photos with the Vince Lombardi Trophy, attend player autograph sessions, and more.
·        Pro Bowl Practices: AFC and NFC team practices – free and open to the public – will be held at the ESPN Wide World of Sports Complex, allowing fans to watch their favorite players as they get ready for the game.
·        Pro Bowl Skills Showdown: For the third straight year, this unique competition pitting AFC and NFC All-Stars, will test the athletic prowess of the NFL’s best players in unique competitions. The showdown will air on Thursday, January 24 at 7 p.m. EST on ESPN.
·        Play Football Skills Showdown: On Friday January 25, for the first time ever, high school students will participate in their own Skills Showdown, which spotlights high school athletes.
·        Play Football Opening Night: Over 600 NFL FLAG and High School football student-athletes will experience what it feels like to be in the spotlight as an NFL player at Play Football Opening Night on Thursday, January 24 at 6 p.m. EST at ESPN Wide World of Sports Arena. Youth and high school football athletes will take part in media interviews with current Pro Bowl players, NFL Legends and members of the media. Student-athletes will enjoy food and entertainment, photo opportunities, and walk the Play Football Red Carpet like the NFL’s best.
·        Pep Rally at Disney Springs: Disney Springs will host a Pep Rally celebrating the 2019 Pro Bowl. The Disney Springs Pro Bowl Bash will include dancing, NFL cheerleaders, team mascots, and much more. The three-day fan event will be broadcast on ESPN Radio, Thursday through Saturday night. NFL Shop will be on-site to offer exclusive Pro Bowl merchandise.
·        NFL Flag Championships Powered By USA Football: This year’s championships for 9-10 coed, 11-12 coed, and 13-14 girls will take place during Community Day and culminate live on ESPN/ABC on Pro Bowl Sunday with the 13-14 Boys Championship.
·        Play Football Celebrity Flag Game: During the 2019 Pro Bowl NFL Legends, celebrities, influencers and the youth football community will participate in a friendly but competitive flag football game on Friday, January 25 at 6 p.m. EST at ESPN Wide World of Sports.
·        Don Shula NFL High School Coach Of The Year Award: The Don Shula NFL High School Coach of the Year Award honors an exemplary football coach at the high school level who displays the integrity, achievement and leadership demonstrated by Coach Shula. The Don Shula Award winner will be announced during the Pro Bowl at Camping World Stadium on Sunday, January. 27.

In the week leading up to the game, the NFL will also recognize youth and high school football players, coaches and programs in special ways, including the NFL FLAG Championships Powered by USA Football, the USA Football National Conference, a congregation of administrators, coaches and leaders in youth and high school football, and the announcement of the prestigious Don Shula NFL High School Coach of the Year Award.

The Pro Bowl is an all-inclusive event for fans on gameday. The 2018 Pro Bowl marked the second autism-friendly game hosted by a professional sports league. The NFL will continue to accommodate fans with a variety of sensory issues at the 2019 game at Camping World Stadium, which became a sensory-inclusive venue earlier this year.

Working with KultureCity, Camping World Stadium’s sensory-inclusive partner, the NFL will offer families who attend the 2019 Pro Bowl support, including sensory accessibility resources and two dedicated sensory rooms located in the stadium on gameday to enable them to enjoy the game with more confidence and comfort.

Fans are encouraged to visit NFL.com/ProBowl for the latest Pro Bowl information.
Publicadas por Axel a la/s 7:08:00 a. m.