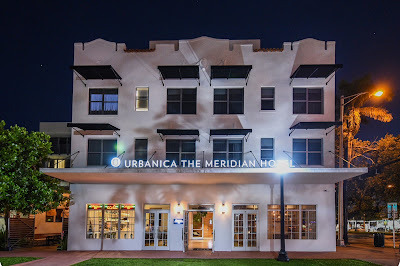 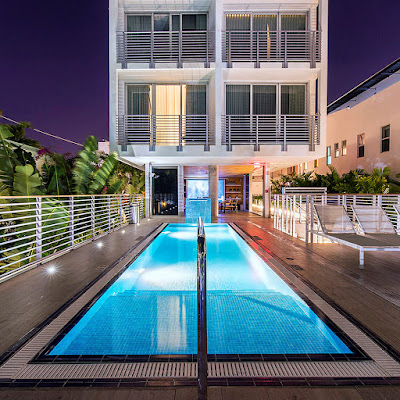 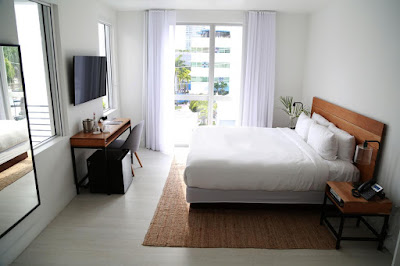 URBANICA THE HOTELS ANNOUNCES FIVE UNIQUE PROPERTIES THAT FEATURE CURATED AMENITIES AND AFFORDABLE RATES IN THE HIPPEST LOCATIONS THROUGHOUT MIAMI AND MIAMI BEACH
Urbanica The Hotels developers Diego Colmenero and Charlie Porchetto, creators of The Meridian Hotel in Miami Beach’s upscale South of Fifth neighborhood, have announced plans for three additional properties in Miami, slated to open by 2020.

After the success of The Meridian, an impeccably reimagined historic 1930s Art Deco hotel at 418 Meridian Ave. that houses a 71-room property, Regina’s Grocery, an Italian deli offering a New York-centric menu, and swanky speakeasy bar Minibar, Urbanica The Hotels is creating its own hospitality district in South Beach area with three more hotels. The Kaskades Hotel on 300 17th Street opened this April, and is managed by Urbanica as an independent operation, yet similar in design to The Meridian Hotel. The renovation of the pre-war property included a new glass lobby, a modernized reception desk, and the addition of Urbanica’s contemporary café, The Food Marchand, in the hotel’s ground floor. Conveniently located, The Kaskades is walking distance to the beach, Lincoln Road, Bass Museum, and popular restaurants including Casa Tua.
The Euclid Hotel, located at 426 Euclid Avenue, is currently under construction and slated to open this summer with 30 guestrooms and Orilla – sister restaurant to their first outpost in Argentina located at The Suites Hotel-- helmed by celebrated Chef Fernando Trocca and top mixologist Inés De Los Santos, in partnership with renowned restaurateur Martin Pittaluga. The menu will feature simple but well-executed cuisine, showcasing seasonal ingredients and high-quality style cut steaks cooked to perfection in a Josper oven. The Josper oven is the star of the restaurant and Chef Trocca masters the art of this cooking method to develop incredibly tasty dishes. The cocktail list will have fresh and delicate mixes created by De Los Santos to complement the menu designed by Chef Trocca.

The Fifth, on 803 Fifth Street, is slated to open in 2020 with 50 guestrooms, on-site parking, and a quaint restaurant, with a menu also designed by Chef Trocca.
The company’s expansion plans in Miami don’t stop there. The Biscayne, located at 3200 Biscayne Boulevard in the burgeoning Edgewater area, is scheduled to open in late 2020. The hotel will feature 210 guestrooms, approximately 5,000 square-feet of retail space on the ground floor, and a 7,000-square-foot rooftop pool, bar and entertainment space. The forward-thinking hoteliers said, “We wanted to offer something new to this area as we felt Edgewater lacked luxury hotels to complement its upscale community filled with high- rise condominiums and notable restaurants. This neighborhood is quickly becoming a more vibrant part of the city, filled with sophisticated families and young professionals. For our hotel guests, The Biscayne will be conveniently located only minutes away from major highways, and trendy neighborhoods, including the Miami Design District, Brickell, Downtown, and Wynwood.”
“We see Miami as the world’s next great metropolis, and our goal is to enrich the lives of both visitors and locals,” said Colmenero and Porchetto. “We have been visiting Miami since our childhoods and are drawn to city’s multi-cultural energy, scenic vistas and cool vibe. Our goal is to create warm, friendly and attentive environments in Miami’s hippest neighborhoods, where our guests feel immediately at home.”
Porchetto and Colmenero are young, ambitious and successful entrepreneurs always in the pursuit of new and innovative opportunities. Although their properties offer modern with luxurious amenities, their room rates are reasonable, attracting unpretentious and loyal customers. They have plans to continue to bring the Urbanica lifestyle to other major cities soon, including Chicago, New York and Los Angeles.
About Urbanica The Hotels
Developers Diego Colmenero and Charlie Porchetto launched Urbanica in 2000. Originally from Argentina, Colmenero and Porchetto were leading developers of residential and commercial real estate properties, who turned their focus to the hospitality industry with the opening of The Suites Hotel in Buenos Aires. This success was followed by the opening of the Libertador. In 2016, the power duo launched their first U.S. outpost, The Meridian Hotel, in South Beach’s exclusive South of Fifth area, and manages The Kaskades Hotel as an independent operation, yet similar in design to The Meridian Hotel.  Urbanica The Hotels has plans to open three additional hotels in Miami by 2020. For more information, please visit www.urbanicathehotels.com.
Publicadas por Axel a la/s 9:10:00 p. m.