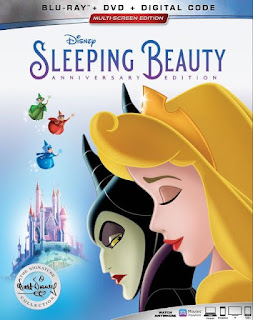 Awaken your inner child with the newest addition to the highly celebrated Walt Disney Signature Collection: Disney’s ultimate princess fairytale classic, “Sleeping Beauty”. On Sept. 24, the wondrous tale, in which Princess Aurora is cursed by the evil fairy Maleficent and can only be awakened with true love’s kiss, arrives home Digitally in HD and Movies Anywhere, and on Blu-ray™, with brand-new bonus features as well as extensive classic bonus material.

The Walt Disney Signature Collection Edition of “Sleeping Beauty” is a must-own addition to every family’s classic collection. Never-before-seen extras feature Walt Disney himself sharing making-of memories, supported by archival recordings and imagery, as well as fun facts about the film. Digital consumers gain access to the latest episode of “Stories From Walt’s Office,” which explores architect Kem Weber’s unique designs for the Walt Disney Studios Lot in Burbank. Plus classic bonus material offers a sing-along to Princess Aurora’s signature song, “Once Upon a Dream”, deleted scenes, and featurettes celebrating the animators who transformed a beloved fairy tale into a cinematic work of art and created the villains we love to hate.

“Sleeping Beauty” features the voice talents of renowned opera singer Mary Costa as Sleeping Beauty and Disney stalwart Eleanor Audley as the evil fairy Maleficent. The film features vibrant visuals, created by a team that included Milt Kahl and Ollie Johnston, two of Disney’s legendary “Nine Old Men”, and an Academy Award®-nominated score, 1959, which was adapted from the incandescent music of Peter Tchaikovsky. It is the sixteenth film in the Disney animated features canon and was the last animated feature produced by Walt Disney to be based upon a fairy tale.

“Sleeping Beauty” is the 11th title to join the Walt Disney Signature Collection, which includes groundbreaking films created or inspired by the imagination and legacy of Walt Disney, featuring timeless stories and characters that have touched generations. The film takes its place alongside “Snow White and the Seven Dwarfs,” “Beauty and the Beast,” “Pinocchio,” “Bambi,” “The Lion King,” “Lady and the Tramp,” “Peter Pan,” “The Little Mermaid,” “Cinderella” and “Aladdin.”

*Bonus features may vary by retailer