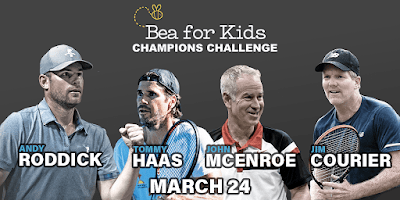 The Champions Series tennis circuit, the North American tour for champion tennis players over the age of 30 and where legends can continue to compete and display their finesse, returns to Orlando’s Amway Center on Tuesday, March 24. This year’s Orlando Champion’s Series, Bea For Kids Champions Challenge, features tennis greats including Andy Roddick, Jim Courier, Tommy Haas and Mardy Fish. Tickets go on sale to the general public on Monday, February 3 at 10 a.m.

“We are excited to partner with Amway Center and Bea For Kids to showcase icons of American tennis at this incredible facility. We appreciate their continued support and look forward to many years of world-class tennis in Orlando,” said Courier, co-founding partner of InsideOut Sports and Entertainment, the event’s promoter.

“Orlando is internationally recognized as the premier sports destination with our world-class venues including Amway Center and the USTA Tennis Center,” said Orlando Mayor Buddy Dyer. “As we continue to attract events like the Champions Series tennis tour, Orlando will only further itself as the leading destination for major sporting events in the U.S.”

“Bea for Kids is a charitable organization that was created to help children in Central Florida,” said Donald Brown, President of Bea for Kids. “This community-wide event seeks to raise awareness and assist with funding our partner organizations, each of which is dedicated to assisting children with complex illnesses that require multi-disciplinary care.”

Serving up its 16th season this year, Champions Series tennis kicks off February 1 at Newport Beach Tennis Club in Newport Beach, CA with Roddick, Fish, James Blake and Robby Ginepri competing in the Oracle Champions Cup Presented by RBC Wealth Management. The Champion Series then heads to the east coast for the season’s second tournament in Orlando.

The Champions Series tournament format features two one-set semifinal matches and a one-set championship match with players making their own line calls. In the Orlando Bea For Kids Champions Challenge, the first semifinal matchup is Courier vs. Fish, and Roddick against Haas, in the second semifinal. Then, the best of the best will battle it out in a one-set championship match immediately following the second semifinal.

In 2019, Haas, in his second season competing on the Champions Series, finished undefeated and claimed the year-long points title with 2,000 points. Blake’s 1,400 points earned him runner-up and rounding out the top three was Roddick with 900 points.

In 2017, the championship was decided in the final match of the season when Roddick defeated Blake in the Los Angeles final at the Sherwood Country Club. During the same year, Roddick, the 2003 U.S. Open Champion and world number one, triumphed while winning four Champions Series titles in Birmingham, AL; Chicago; Lincoln, NE and Los Angeles. Blake, the former world number four and former U.S. Davis Cup star, won series titles in Charleston, SC; Winston-Salem, NC and Lynchburg, VA.