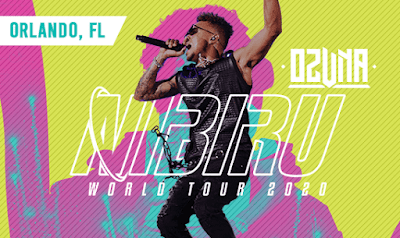 Ozuna, one of Latin music's most influential artists, returns to the touring stage in 2020 with the much anticipated Nibiru World Tour. Presented by AURA Music, Elite Media & Marketing (EMM) and Live Nation, the 19-city U.S. leg of the tour kicks off in Atlanta on April 2. Ozunareturns to Orlando’s Amway Center on Saturday, April 4. Tickets go on sale to the general public on Friday, January 24 at 10 a.m.

With over 69 titles on the Billboard Hot Latin Songs chart in the last three years, fans of the Latin music superstar can expect him to perform his greatest hits live with a full band, state-of-the-art lighting and production and pyrotechnics.

Univision’s Premio Lo Nuestro, the Spanish-language awards show honoring the best of Latin music, recently announced their nominees for the 32nd edition withOzuna receiving eight nominations and last year, he took home 10 awards, more than any other artist. The Latin music superstar recently released his long-awaited album, “Nibiru,” which debuted at number one on Billboard’s Latin Albums chart and the New York Post hailed the artist as the “New King of Reggaeton.” On November 28, 2019, Ozuna made his first Macy’s Thanksgiving Day parade appearance and performed his single, “Hasta Que Salga” to 22.1 million TV viewers and 3.5 million parade attendees.

The multi-platinum Puerto Rican singer/songwriter is leading the wave of the new generation of Latin music artists. Last year marked an epic year for Ozuna,winning more awards than any other recording artist across all genres. Among his numerous achievements, last year Ozuna achieved what no other artist had ever done previously by becoming the single biggest finalist of the Billboard Latin Music Awards with 23 nods in 15 categories. He reached another career milestone yet again and took home 11 awards, including the coveted artist of the year honor and became the biggest winner in a single year in the history of the awards. At the 2019 BMI Awards, he won Contemporary Latin Songwriter of the Year and he was also recognized as one of Time Magazine’s 100 Most Influential People list in 2019. Currently, he ranks among the 2019 Nielsen Music Mid-Year Top Five Latin Artists and Top Five Latin Albums. In 2018, he was named YouTube’s most-viewed artist globally and also holds the record as the artist with the most videos with over one billion views, seven in total. His debut studio album, “Odisea,” became the longest-leading number one album by a male artist on Billboard’s Top Latin Albums charts, with an impressive 46 weeks, while his sophomore studio album, “Aura,” debuted at number seven on the all-genre Billboard 200 chart and remained number one on the Top Latin Albums chart for 17 weeks.

What the media is saying about Ozuna.

“The Golden Child of the digital-streaming era” ~ Vibe Magazine

“The future is Ozuna.” ~ Billboard

“One of the hottest reggaeton stars on the planet.” ~ New York Post