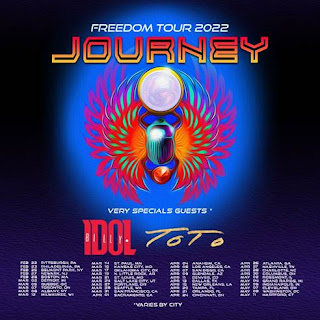 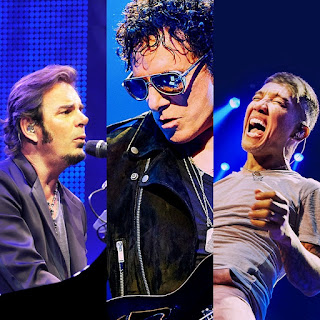 Citi is the official card of the Journey Freedom Tour 2022. Citi cardmembers have access to pre-sale tickets for U.S. dates beginning Tuesday, November 16 at 10 a.m. ET until Thursday, November 18 at 10 p.m. ET through Citi Entertainment. For complete pre-sale details, visit www.citientertainment.com.  A limited number of exclusive VIP Packages are also available. These exclusive offers can include a fantastic selection of tickets, custom merchandise and much more.

"It's that time - time to get back to where we are used to being - on stage," said Neal Schon, Journey lead guitarist. "We are looking forward to shifting into high gear and bringing you the best show possible. The band is running on all 12 cylinders and very excited! Please come and join us once again for an evening full of rocking stage-connection fun. See you soon, friends."

Toto's Steve Lukather shared, "On behalf of myself and the band, we are very honored and excited to do this tour with our old and dear friends, Journey. It's going to be a great night of music, and as all the guys are lifelong friends . . . a blast off stage as well."

The diamond-selling Rock & Roll Hall of Famers are one of rock music's most influential icons. Their catalog of global chart-topping hits have become arena-rock staples, including "Don't Stop Believin," "Any Way You Want It," "Faithfully" and "Lights," all of which have left an indelible mark on pop music. The band is set to release its 17th studio album, "Freedom," next year. Last summer, the band headlined the Lollapalooza Festival in Chicago, uniting thousands of fans across generations with their decade-spanning setlist of beloved anthems. The group also rocked Central Park with "Anyway You Want It" and "Don't Stop Believin" at We Love NYC: The Homecoming Concert, in addition to honoring 9/11 first responders at the Tunnel to Towers concert in August. Journey includes founder Neal Schon (lead guitarist), Jonathan Cain (keyboards, backing vocals), Arnel Pineda (lead vocals) Jason Derlatka (keyboards, backing vocals), and Deen Castranovo (drums, backing vocals).

Since the group's formation in 1973, Journey has earned 19 Top 40 singles, 25 gold and platinum albums, and has sold nearly 100 million albums globally. Their "Greatest Hits" album is certified 15x-platinum, making Journey one of the few bands to earn diamond certification, and their song "Don't Stop Believin'" has been streamed over one billion times alone.

In 2017, Journey was inducted into the Rock & Roll Hall of Fame. Their 2018 co-headlining tour with Def Leppard was the band's most successful tour to date, landing them in the Top 10 year-end touring chart with more than 1 million tickets sold and earning them the prestigious Billboard "Legends of Live" touring award. In March of 2019, the band released "Escape & Frontiers Live In Japan," a live DVD/CD set from their concert at the Budokan in Tokyo featuring the band's first-ever performances of the albums, "Escape" and "Frontiers" in their entirety. Journey has also received a star on the Hollywood Walk of Fame and was inducted into the Hollywood Bowl Hall. Additionally, the band is the subject of the award-winning documentary "Don't Stop Believin': Everyman's Journey" about the band's resurgence upon adding Arnel Pineda as lead singer after founding member Neal Schon discovered the Philippines native on YouTube.

Over the past several years, Toto had had a significant renaissance in popularity like few bands at this point in their career. In 2018, the band marked their 40th anniversary by releasing their brand-new greatest hits album, "40 Trips Around The Sun" and embarked on their most successful worldwide tour to date. Few ensembles in the history of recorded music have individually or collectively had a more significant imprint on pop culture than Toto members. As individuals, the band members can be heard on an astonishing 5,000 albums that synchronously amass a sales history of half a billion albums. Amongst these recordings, NARAS applauded the performances with more than 200 Grammy nominations.

Collectively, Toto has over two billion streams worldwide on all streaming services. "Africa," one of their biggest hits, went from a platinum single to recently becoming recertified six-time platinum. The band has also found a new generation of fans. With now 40+ years together and thousands of credits, including the biggest-selling album of all time: Michael Jackson's "Thriller," and accolades to their names, Toto remains one of the top-selling touring and recording acts in the world. They are the benchmark by which many artists base their sound and production. They continue to transcend the standards set by the entire music community, being simply synonymous with musical credibility. They are pop culture and are one of the few 70's bands that have endured the changing trends and styles, continuing to remain relevant while enjoying their multi-generational global fan base.

Combining the power of the live event with a focus on true artist development, AEG Presents is a world leader in the music and entertainment industries. Operating across four continents, the company has an unparalleled commitment to artistry, creativity, and community. Its tentpole festivals and multi-day music events — which include

Amway Center, owned and operated by the City of Orlando on behalf of the Central Florida community, hosts major national events, concerts and family shows since its opening in fall 2010. The Orlando Magic served as the developer and the facility was designed to reflect the character of the community, meet the goals of the users and build on the legacy of sports and entertainment in Orlando. The building’s exterior features a modern blend of glass and metal materials, along with ever-changing graphics via a monumental wall along one facade. A 180-foot tall

tower serves as a beacon amid the downtown skyline. The 875,000 square foot, Leadership in Energy and Environmental Design (LEED) Gold certified building features a sustainable, environmentally-friendly design and unmatched technology, including 1,100 digital monitors, the tallest high-definition video board in an NBA venue and multiple premium amenities available to all patrons in the building. Amway Center was recently honored with the International Association of Venue Managers' 2017 Venue Excellence Award, which is bestowed upon facilities that excel in the management and operation of public assembly venues. Amway Center was the only arena to garner this distinction. Additionally, the arena has earned numerous awards, which most notably includes TheStadiumBusiness Awards’ 2013 Customer Experience Award and was named SportsBusiness Journal's 2012 Sports Facility of the Year. For more information about the Amway Center, visit AmwayCenter.com.