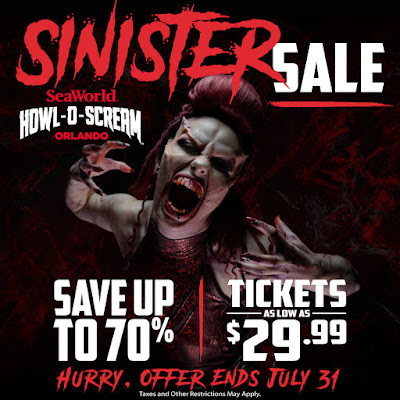 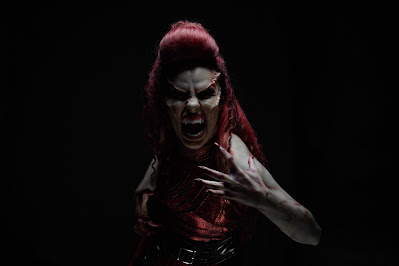 WHAT: After a successful "inaugural fear," Howl-O-Scream is coming back to SeaWorld Orlando, and this year promises to be bigger than ever before with more pulse-pounding haunts, thrills, and chills. Howl-O-Scream 2022 features more coasters, more haunted houses, more scare zones and more unexpected frights.  SeaWorld Orlando is only scratching the surface, and guests will not know what will be lurking around every corner of the park. There are several all-new attractions coming to this year’s haunt, along with fan favorites from last year and a few re-imagined experiences that were announced today. They Include:

Guests can also take their night of frights to another level by braving SeaWorld Orlando’s roller coasters at night. They can take a chilling ride on the park’s newest thrill ride “Ice Breaker”.  It was rated the #1 Best New Theme Park Attraction by USA Today’s 10Best Reader’s Choice Awards and features the steepest beyond vertical drop in Florida.

There are big savings for park guests planning to attend this year’s Howl-O-Scream. Guests can save up to 70 percent, with Howl-O-Scream tickets as low as $29.99 during the Sinister Sale, which runs for a limited time through July 24.

WHEN: Howl-O-Scream runs select nights from September 9 through October 31. Tickets can be purchased online at SeaWorld.com.

ABOUT: SeaWorld Entertainment, Inc. (NYSE: SEAS) is a leading theme park and entertainment company providing experiences that matter, and inspiring guests to protect animals and the wild wonders of our world. The Company is one of the world's foremost zoological organizations and a global leader in animal welfare, training, husbandry and veterinary care. The Company collectively cares for one of the largest zoological collections in the world and has helped lead advances in the care of animals. The Company also rescues and rehabilitates marine and terrestrial animals that are ill, injured, orphaned or abandoned, with the goal of returning them to the wild. The SeaWorld® rescue team has helped more than 39,000 animals in need over the last 55 years. SeaWorld Entertainment, Inc. owns or licenses a portfolio of recognized brands including SeaWorld, Busch Gardens®, Aquatica®, Sesame Place® and Sea Rescue®. Over its more than 55-year history, the Company has built a diversified portfolio of 12 destination and regional theme parks that are grouped in key markets across the United States, many of which showcase its one-of-a-kind zoological collection. The Company's theme parks feature a diverse array of rides, shows and other attractions with broad demographic appeal which deliver memorable experiences and a strong value proposition for its guests.