"Columbo" Writer Takes Us To A Future When Prisoners Are Instantly Aged The Number of Years of Their Sentence - But What If You're Innocent? New Action/Sci-Fi Novel "TimeLock" Debuts 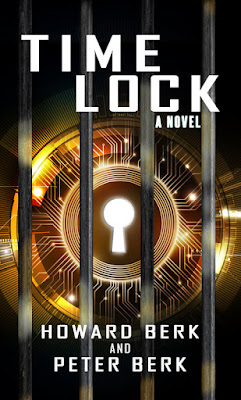 "Columbo" Writer Takes Us To A Future When Prisoners Are Instantly Aged The Number of Years of Their Sentence - But What If You're Innocent? New Action/Sci-Fi Novel "TimeLock" Debuts

In 2032, Inmates Are Instantly Aged The Number Of Years Of Their Sentence. But What Happens If You’re Innocent?

Set in a near future defined by terrifying new technology, rampant crime, prison overcrowding and an unbalanced Governor likely to become our next President, “TimeLock” is the first in an ambitious series of action and sci-fi short fiction designed for quick reading and ideal translation into film or television.

A fast-paced thriller with romance and humor that evokes such films as “The Fugitive,” “In Time,” and “Logan’s Run,” “TimeLock” revolves around a highly controversial cellular acceleration process that instantly ages prisoners the total number of years of their sentence. In other words – three strikes and you're old . . . very old. Just one problem – what happens if you're innocent?

Falsely convicted of murder, 23-year-old Morgan Eberly is sentenced to be aged 40 years in a TimeLock capsule. When a riot interrupts his processing halfway through, Morgan – suddenly a middle-aged man of 43 – manages to escape. With powerful forces on his trail, Morgan enlists the help of the initially-resistant Janine Price, the FBI agent who arrested him. Together, they investigate the murders of ex-prisoners who were transformed by TimeLock and soon discover why Morgan is certain to be the program’s next victim. Can Morgan and Janine unlock the truth about TimeLock before it's too late?

“TimeLock” will be sold in print and e-book at Amazon, Barnes & Noble, IndieBound, and anywhere books are sold. For the latest updates, events, and reviews, connect with the authors on Facebook and Instagram @timelocknovel and follow the “TimeLock” book page at www.ingramelliott.com/timelock.

From The Page To The Screen?

Given IngramElliott’s mission to bring great stories to light in print and on-screen, the company will be actively exploring opportunities to develop “TimeLock” and its sequels as feature films or limited series. As it happens, “TimeLock” was in fact first written as a screenplay before being more recently novelized. At present, a total of five “TimeLock” novels are planned. Details about “TimeLock 2: The Kyoto Conspiracy” will be announced shortly.

IngramElliott is an award-winning independent publisher with a mission to bring great stories to light in print and on-screen. For more information, please visit www.ingramelliott.com.