Disney's DESCENDANTS, Disney introduces us to a young Latina role-model for women of all ages, Sofia Carson of Colombian decent, who stars as Evie. 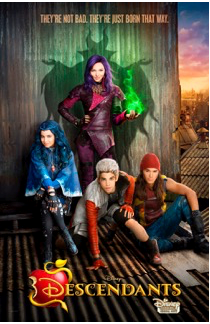 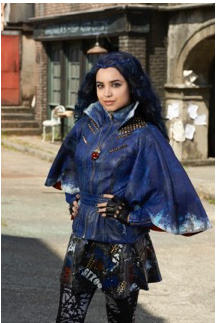 On July 31st, Disney Channel is proud to debut its original movie, DESCENDANTS, an epic live-action adventure comedy that presents the teenage kids of Disney’s most infamous villains. Brought to you by Emmy Award-winning director and choreographer Kenny Ortega, known for the popular musical franchise High School Musical,

DISNEY’S DESCENDANTS is a contemporary, music-driven story that centers around Mal (Dove Cameron), Evie (Sofia Carson), Carlos (Cameron Boyce) and Jay (Booboo Stewart), the teenage descendants of Disney’s villains — Maleficent (Kristin Chenoweth), the Evil Queen (Kathy Najimy), Cruella de Vil (Wendy Raquel Robinson) and Jafar (Maz Jobrani). Set 20 years after all the villains have been imprisoned on the Isle of the Lost, the teenagers face challenges in living up to parental and peer expectations. Pressured to follow in their parents’ evil footsteps, the villain kids realize they can determine their own fate and decide

In DESCENDANTS, Disney introduces us to a young Latina role-model for women of all ages, Sofia Carson of Colombian decent, who stars as Evie. Sofia is the complete package with her beauty, smarts and skills having starred in other hit series as well as having worked with acclaimed music producers on her singer/songwriter career. Born and raised in Fort Lauderdale, FL, Sofia is fluent in Spanish, English and French and is currently completing her undergraduate degree at University of California Los Angeles (UCLA).