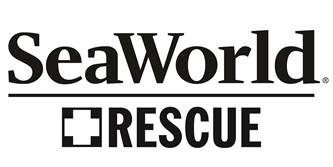 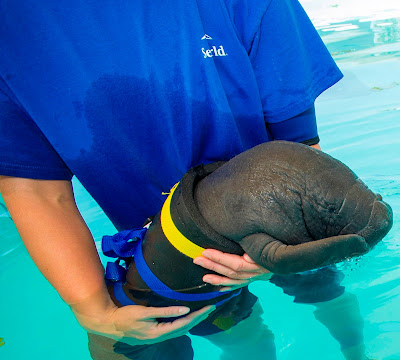 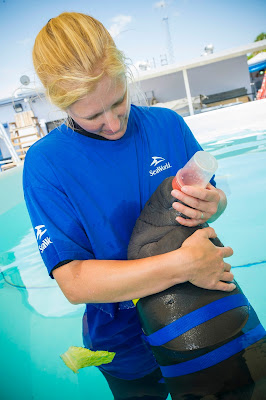 During the past week, the SeaWorld Orlando Animal Rescue Team has been caring for two rescued orphaned baby manatees. The newborn and month-old calves were both brought to SeaWorld Orlando’s rehabilitation facility after being rescued by the Florida Fish and Wildlife Conservation Commission (FWC). The calves were both seen by locals who said the manatees appeared lethargic and swimming alone.
First Rescued Manatee Calf

The first manatee - which was found floating on its side - was rescued July 7, 2015, from Merritt Island and immediately transported to SeaWorld for instant treatment, including fluids and antibiotics.

To help the young animal float, the SeaWorld team used a custom-fitted infant life vest with a foam flotation device. This tool has allowed the manatee to remain upright ever since.
Second Rescued Manatee Calf

The second manatee calf that was found thin and alone was retrieved Monday morning from the Palm Coast and brought directly to SeaWorld for care. This male is believed to be about a month old. He is 47 pounds and 3 feet long.

Both manatees are being tube fed a specialized formula every three hours. The SeaWorld team also is working to teach the manatees to suckle so they can receive additional nutrition from a bottle. Around-the-clock care will continue as long as necessary.

So far this year SeaWorld has rescued or helped rehabilitate 29 manatees and the park has returned 27 back to their natural environment. Over the last five decades, SeaWorld has rescued more than 26,000 animals in need, whether they are ill, injured, orphaned or abandoned. The goal with every rescue is to rehabilitate the animal back to health and return them to their natural environment as soon as possible.

The MRP is a cooperative group of non-profit, private, state, and federal entities who work together to monitor the health and survival of rehabilitated and released manatees. Information about manatees currently being tracked is available at www.manateerescue.org. The endangered Florida manatee is at risk from both natural and man-made causes of injury and mortality. Exposure to red tide, cold stress and disease are all natural problems that can affect manatees. Human-caused threats include boat strikes, crushing by flood gates or locks, and entanglement in or ingestion of fishing gear.
All manatee rescue footage is produced by SeaWorld under the FWS Permit Number MA7701911.