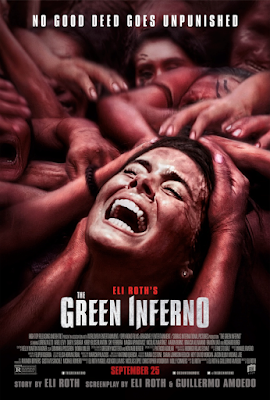 NO TE LA PIERDAS !
How far would you go for a cause you believe in? In Eli Roth’s terrifying new film, The Green Inferno, a group of college students take their humanitarian protest from New York to the Amazon jungle only to be taken prisoner by the indigenous tribe they came to save.

The Green Inferno marks Eli Roth’s return to directing for the big screen for the first time since his Hostel franchise, and tells the story of what happens when “slacktavism,” the well-meaning social media response to global catastrophes, turns into terror in the depths of the Amazon rainforest. Dark and primitive customs still rule the Amazon jungle: cannibalism and other mind, body and soul-destroying rituals.

Trapped in the village, these high-tech modern-world students experience the ultimate in primal barbaric terror, suffering unspeakable acts of violence in an intense and chilling rituals reserved only for the most threatening intruders.