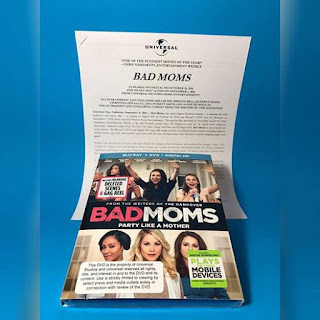 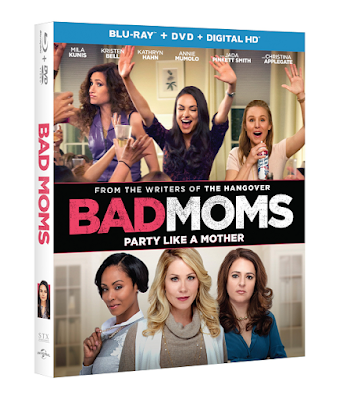 Bad Moms, the year’s biggest R-rated comedy – a runaway hit with audiences and critics alike – is coming to Digital HD on October 18, 2016 and Blu-ray™, DVD and On Demand on November 1, 2016, from Universal Pictures Home Entertainment. The raunchy film described as “incredibly funny!” by Chris Nashawaty, Entertainment Weekly, is the first R-rated comedy since The Hangover to earn an “A” grade from audiences nationwide. Hailed by critics from The New York Times, Chicago Sun-Times and Washington Post, Bad Moms is one comedy not to be missed.  The Blu-ray™, DVD and Digital HD come with nearly an hour of exclusive bonus content including hilarious deleted scenes, gag reels and exclusive interviews with the cast and their moms that will have everyone laughing again and again!
Written and directed by Jon Lucas and Scott Moore (The Hangover, Four Christmases) and produced by Suzanne Todd, (Alice Through The Looking Glass) and Bill Block (Dirty Grandpa), the comedy also features Jada Pinkett Smith (The Women), Christina Applegate (Anchorman 1 &2), Annie Mumolo (The Boss) and Jay Hernandez (Suicide Squad).  It’s time to party like a mother with this hysterical and relatable film.