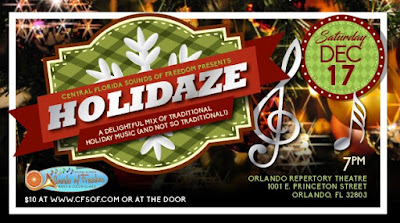 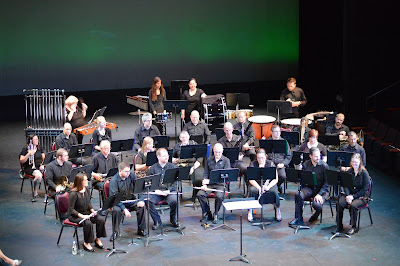 Central Florida Sounds of Freedom Band and Color Guard, Orlando's own LGBT marching and concert band, is pleased to announce our first concert since playing our 5th anniversary show on the day of the Pulse shooting. We know this holiday season will be bittersweet for so many who are celebrating their first Christmas since that tragic event. We hope to bring the healing power of music to our community once again as we did in the days and weeks immediately after the shooting.

Central Florida Sounds of Freedom Band and Color Guard, Orlando’s own LGBT+ concert and marching band, presents our winter concert “Holidaze” on December 17th at 7 pm at the Orlando Repertory Theatre (1001 East Princeton Street, Orlando 32803). This show features beloved holiday music from Halloween to New Years Eve, plus a sparkling silent auction. Tickets are $10; available at the door or online at www.CFSOF.com. Kids 12 and under are FREE!

Let the spirit of the holidays move you to join us for this one of a kind event, as we play joyous holiday tunes to uplift your spirit. Don we now our gay apparel to CELEBRATE the season!

Central Florida Sounds of Freedom performed its 5th anniversary concert on June 12, 2016, the day of the Pulse massacre. In the days and weeks afterward they performed at countless vigils, memorial services and remembrances all across central Florida. Their founding mission is to provide exceptional music entertainment and inspirational services for the community; to promote LGBT awareness, acceptance and equality in a positive way through performances ranging from parades and concerts to visual arts. Members are role models from all walks of life with one common goal:

To unite, serve and educate through music, entertainment and the arts
Publicadas por Axel a la/s 3:22:00 p. m.