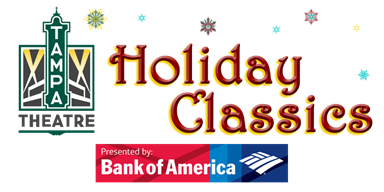 IT’S BEGINNING TO LOOK A LOT LIKE
HOLIDAY CLASSICS AT TAMPA THEATRE!

Tampa’s Majestic Movie Palace Shares the Warmth and Light of the Season
with Classic Holiday Favorites, a Visit from Santa, and Sing-Alongs Before Every Show
When you visit Tampa Theatre, you’re not just coming for a movie – you’re coming for an experience. One of the brightest and most beloved of those experiences for our guests is the tradition of sharing favorite holiday films on the big screen with family and friends, and singing along to Christmas carols with the Mighty Wurlitzer Theatre Organ before the show.

Miracle on 34th Street, the perennial Christmas classic, was astonishingly first released to theatres in May of 1947. Why May? Because Hollywood power broker and head of 20th Century Fox Darryl F. Zanuck said more people go to the movies in warmer weather. Doubtless that was true, but then they probably weren’t headed off to see Christmas movies. As a result the promotional materials for the film, believe it or not, tried to hide the fact that it was about Santa Claus. They put John Payne and Maureen O’Hara (as the irrepressible events manager Doris) at the front, ignoring Kris Kringle entirely. Still, it won several Academy Awards. Its uplifting spirit and its message that magic can still happen in the mundane world couldn’t be denied, and it earns its place in our hearts anew every holiday season. 1h 36m / Not Rated / Family Drama

Before the film, Santa himself will be in the lobby for family photos with your own camera or cell phone starting at 2:00pm, and he’ll share a special story from the stage immediately before the film at 3:00pm
·         HOLIDAY INN (1942)
3 p.m. Sunday, Dec. 4

A lot of holiday movies try to be inspirational or uplifting, to warm our little hearts with a dose of joy and loving kindness. Holiday Inn instead aims to be simply delightful. Bing Crosby and Fred Astaire do exactly what audiences always wanted them to do: they play entertainers and showbiz men, they tell a story about finding and losing and finding love, and they dance and sing like nobody else ever has. And they do it all to music by Irving Berlin. This season can be stressful; hopefully watching Holiday Inn can help. 1h 40m / Not Rated / Musical Comedy
·         WHITE CHRISTMAS (1954)
3 p.m. Sunday, Dec. 11

White Christmas is most famous for Bing Crosby singing the song “White Christmas,” which was first performed in the movie… Holiday Inn. But in the twelve years since that movie came out, it had already become a seasonal standard, and setting a new movie around it seemed obvious. Plus when you have Irving Berlin ready to write another movie musical for you, you just say yes. Crosby, Danny Kaye, Rosemary Clooney and Vera-Ellen are captivating as matched pairs of entertainers playing out a timeless story of cute misunderstandings as they travel the road to love, and the music and dancing will put you in the holiday spirit without fail. 2h / Not Rated / Musical Comedy

Watch It’s a Wonderful Life every year, and you’ll see a different message in it every time. On its face, it’s a heartwarmer about treating your fellow man with fairness and love, knowing that they will stand behind you when you need them. But it’s also a political movie about the destructive influence of consolidated wealth (Lionel Barrymore’s Mr. Potter is one of cinema’s great villains); it’s nearly a tragic portrait of a talented dreamer who sacrifices himself completely for others and is almost destroyed by his own frustration; and in the tradition of Dicken’s three Christmas ghosts, it’s a look at the chilling consequences of all the paths not taken in a life. Solemn and sweet but uncompromising, the movie refuses to let George Bailey (Jimmy Stewart) off easy. And the key is the title — it may not be the life he wanted, it may not be the life he deserved, it may not always be easy to admit, but it is, truly, a wonderful life. 2h 10m / Not Rated / Comedy-Drama

Love Actually is three and a half movies at once: it’s a Christmas movie, a romantic comedy, an ensemble movie and half of an anthology movie (the various plots actually do all tie together and reference each other, so it only gets partial credit here). There are at least ten stories happening simultaneously, and it stars at least fifteen actors who, in a more normal film, would be billed above the title. Christmas draws people together, so making a series of interlocking love stories makes a lot of sense; Christmas can also make people anxious and fretful, so making the movie a frantic accumulation of plots makes a lot of sense too. But in the end it presents an idea that’s familiar to a lot of holiday films: what matters most in a life is who you love and how well you love them. That message deserves to be told ten times per movie, at least. 2h 16m / Rated R / Comedy-Drama

Tickets for the Holiday Classics movie series are $10 for adults and $8 for children and Tampa Theatre Members at the Box Office or online at www.TampaTheatre.org ($2 convenience fee applies).

The Holiday Classics Movie Series is presented by Bank of America, with media support by WEDU. The 7:30pm show of It’s A Wonderful Life on Saturday, Dec. 17 is sponsored by Unlimited Printing & Copying.