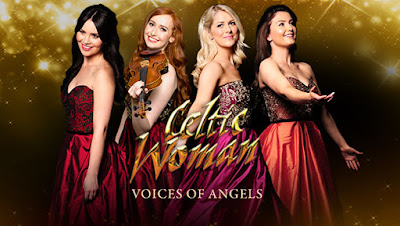 Multi-platinum international music sensation Celtic Woman’s latest studio album, “Voices of Angels” (released November 18, 2016 on Manhattan/Caroline) debuted atop the Billboard World chart at #1, and it has been riding high since its release. The groups “Destiny” album, which also topped the chart upon its release, remains in the Top Ten at #10, more than 50 weeks after its release. That album is in the running for a GRAMMY® Award in the category of “Best World Music Album.” It marks the group’s first-ever nomination.

In support of “Voices of Angels,” the Celtic Woman foursome – featuring the angelic voices of Susan McFadden, Mairéad Carlin, Éabha McMahon and the breathtaking new Celtic violinist Tara McNeil – will embark on a four-month tour. The 85-city tour arrives at Orlando’s Bob Carr Theater on Friday, March 3, 2017. Tickets for the performance are on sale now. Tickets start at $50.61 and may be purchased online at drphillipscenter.org, by calling 844.513.2014 or by visiting the Dr. Phillips Center Box Office at 445 S. Magnolia Avenue, Orlando, FL 32801 between 10 a.m. and 4 p.m. Monday through Friday, or 12 p.m. and 4 p.m. Saturday. Online and phone ticket purchases are subject to handling fees.

“Voices of Angels” contains some of the most popular songs from the Celtic Woman repertoire, along with several previously unrecorded tracks, all with stunning new orchestral arrangements recorded with the 72-piece orchestra of Ireland. Celtic Woman has a remarkable 12-year legacy of introducing the most talented singers and musicians from Ireland onto the world stage.

About Celtic Woman
Following its debut on PBS in 2005, Celtic Woman has achieved massive success, encompassing twelve chart-topping albums, nine DVDs and nine public television specials, leading to sales of over 10 million albums, with platinum success in nine countries. Each of the 12 CDs – including 2016’s “Voices of Angels” – has reached #1 on Billboard’s World Albums chart. The group has been named Billboard Magazine’s #1 World Albums Artist six times. As a touring powerhouse, the group has performed for over four million fans across 23 countries and six continents with an especially devoted following in America. Their shows are renowned as high quality entertainment with exceptional musical performances and stunning visual productions, enthralling audiences of all ages.
Publicadas por Axel a la/s 12:31:00 p. m.