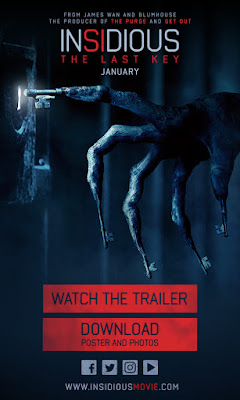 From James Wan and Blumhouse, the producer of THE PURGE and GET OUT, the film arrives in theaters January 5, 2018.

The creative minds behind the hit Insidious trilogy return for Insidious: The Last Key.  In the supernatural thriller, which welcomes back franchise standout Lin Shaye as Dr. Elise Rainier, the brilliant parapsychologist faces her most fearsome and personal haunting yet: in her own family home.

The film is written by co-creator Leigh Whannell (Saw), who wrote the trilogy and directed Chapter 3; produced by Insidious regulars Jason Blum (The Purge series, Get Out), Oren Peli (Paranormal Activity) and co-creator James Wan (The Conjuring, Furious 7); and directed by series newcomer Adam Robitel (The Taking of Deborah Logan).