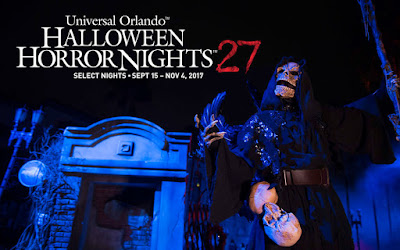 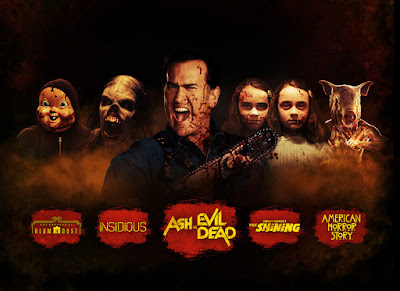 Universal Orlando’s Halloween Horror Nights
2017 is Now Open
The nation’s premier Halloween event, Halloween Horror Nights, is now open at Universal Orlando Resort – with more event nights and terrifying frights than ever before.
This year, Halloween Horror Nights presents the most unearthly and macabre collection of terrors called The Festival of the Deadliest. This ancient tradition has taken root inside Universal Studios Florida and is filled with hellish wonders that are hard to resist and impossible to escape. This ghastly collection of madmen and monsters from beyond the veil have joined together to revel in firelight and create the ultimate afterlife of fright. And this is just the beginning.

Unimaginable horrors come to life in nine disturbingly-real haunted houses based on some of the most horrifying legends in pop culture. Guests will:
And there’s even more horror lurking in the streets of Universal Studios Florida with five unique “scare zones,” two of which are based on two celebrated horror films –Trick ‘r Treat and The Purge – as well as three haunting original concepts.
Universal Orlando’s Halloween Horror Nights will also feature two incredible live shows. This year, Academy of Villains returns for a second consecutive year with an all-new show, ACADEMY OF VILLAINS: AFTERLIFE – incorporating fearsome elements from this year’s Festival of the Deadliest “scare zone.” Plus, after 26 years of Excellent Halloween Adventures, Bill and Ted are bringing their Farewell Tour to Halloween Horror Nights to review this year’s most outrageous moments.
For a record-breaking 34 select nights through November 4, guests can experience theme park thrills by day and terrifying horror film chills by night at Halloween Horror Nights. For more information, visit www.HalloweenHorrorNights.com/Orlando.
Universal Studios’ “Halloween Horror Nights” is the ultimate Halloween event. For more than 20 years, guests from around the world have visited Halloween Horror Nights in Orlando and Hollywood to become victims of their own horror film. The streets of each coast’s event are transformed into highly-themed scare zones where menacing “scare-actors” lunge from every darkened corner. Multiple movie-quality haunted houses are erected throughout the event, based on everything from iconic slasher films to hit horror television series to haunting original stories.