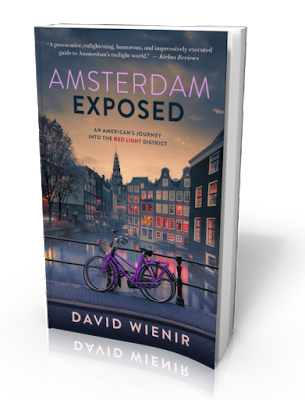 AMSTERDAM EXPOSED -- a perceptive, heartfelt, and thoroughly original memoir from American author David Wienir which is sure to be one of Summer 2018's most compulsively readable and talked-about books.
Amsterdam lures millions of visitors to its cobblestoned streets every year -- including many in search of an experience to remember in its cannabis-filled coffeeshops and historic Red Light district.
While there's no shortage of travel books out there claiming to reveal everything there is to know about touring the city, May 1st marks the arrival of a story about the Dutch capital unlike any before: AMSTERDAM EXPOSED: An American's Journey into the Red Light District, which takes place in 1999, days before the turn of the millennium, as Wienir – then an Ivy League exchange student – finds himself newly arrived in a city a world apart from the innocent California cul-de-sac in which he was raised.
Fascinated by the women in the Red Light district's windows and determined to learn more about them as human beings -- their histories, hopes, and dreams -- readers follow Wienir as he wanders through the city's twilight world, immerses himself in Dutch culture, attempts to befriend prostitues without becoming a customer (a rule he sets for himself at the beginning of this journey), and ultimately undergoes a paradigm-shifting transformation regarding the world's oldest profession.
An American abroad story, and also a love story; AMSTERDAM EXPOSED is an uplifting tragedy, full of humor from beginning to end. It’s an Amsterdam survival guide, a sympathetic look at a societal problem, a little piece of policy -- and a sweet farewell to a world just about gone.
As compulsively readable as it is thought-provoking, AMSTERDAM EXPOSED reveals:
2018’s most unusual love story: how the author’s friendship with, and promise to, a Dutch prostitute shaped him – and changed both of them forever.

About the Author:
David Wienir is a business affairs executive at United Talent Agency and entertainment law instructor at UCLA Extension. Before UTA, he practiced law at two of the top entertainment law firms where he represented clients such as Steven Spielberg and Madonna. His previous books include Last Time: Labour’s Lessons from the Sixties (co-authored with a Member of Parliament at the age of 23), The Diversity Hoax: Law Students Report from Berkeley (afterword by Dennis Prager), and Making It on Broadway: Actors’ Tales of Climbing to the Top (foreword by Jason Alexander).
Educated at Columbia, Oxford, The London School of Economics, Berkeley Law, and the Vrije Universiteit Amsterdam, David is married to Dr. Dina (to whom the book is dedicated), a pioneer of the cannabis movement who has been named “Queen of Medical Marijuana in LA” by Rolling Stone Magazine and is the inspiration for the Nancy Botwin character in the show Weeds.
Keep up with all things Amsterdam Exposed at AmsterdamExposed.com, and connect with David on Facebook, LinkedIn, Instagram @RedLightDistrictBook, and Twitter @AmsterdamBook.
Amsterdam Exposed: An American’s Journey into the Red Light District will be released May 1, 2018 with De Wallen Press, and available at that time in paperback and e-book formats wherever books are sold.
Publicadas por Axel a la/s 7:50:00 a. m.