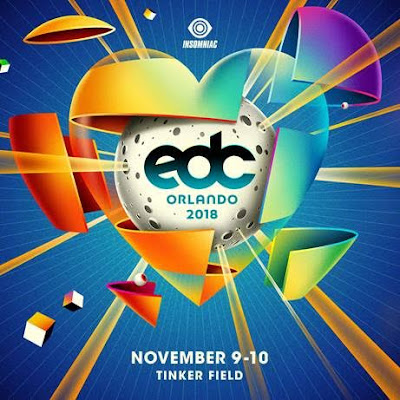 Insomniac, the producer behind North America’s largest dance music festival, announced that Electric Daisy Carnival (EDC) Orlando will return to the entertainment capital of the south and once again transform Orlando’s Tinker Field into a neon-lit carnival atmosphere accompanied by the world’s most sought-after dance music stars. Headliners will join together for another wonderful celebration of music, art, and community on Friday, Nov. 9 and Saturday, Nov. 10
.

Offering Headliners the opportunity to immerse themselves in a two-day adventurous musical experience full of sunshine and positive energy, world-renowned dance music artists will perform across three magnificent, top-of-the-line stages that EDC is known and loved for. Throughout the festival, fans exploring the multi-sensory adventure can expect to experience interactive theatrical performers, full-sized carnival rides, unique and interactive art installations and more.  Tickets for the 8th annual EDC Orlando go on sale on Wednesday, April 18 at 12 p.m. EST.

Welcoming a record-breaking crowd of 80,000 Headliners in November 2017, the breathtaking 7th edition of EDC Orlando joined attendees together to experience the new kineticGAIA stage following its debut at EDC Las Vegas. Amidst an expanded festival footprint along with more than 80 of the top dance music artists in the world, Headliners celebrated love and acceptance where all are welcome. Press selects from EDC Orlando 2017 can be downloaded here. Approved photo credit can be found in the individual file names.

About Insomniac
Insomniac produces some of the most innovative, immersive music festivals and events in the world. Enhanced by state-of-the-art lighting, pyrotechnics and sound design, large-scale art installations, theatrical performers and next-generation special effects, these events captivate the senses and inspire a unique level of fan interaction. The quality of the experience is the company’s top priority.

Throughout its 25-year history, Insomniac has produced more than 1,200 festivals, concerts and club nights for nearly 5 million attendees over five continents. Insomniac’s events are held across the U.S. as well as in Mexico, Australia and Japan. The company’s premier annual event, Electric Daisy Carnival Las Vegas, is the largest dance music festival in North America, and attracted more than 400,000 fans over three days in June 2017.

The company was founded by Pasquale Rotella, and has been based in Los Angeles since it was formed in 1993.