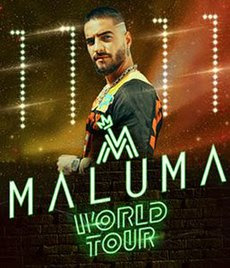 Maluma 11:11 World Tour in support of his latest album. Produced by Cardenas Marketing Network (CMN), the 21-city tour kicked off on September 6 in San Diego, CA with a visit to Orlando’s Amway Center on Thursday, October 10.


At only 25 years of age, Maluma has taken the world by storm with his live shows. In 2017, he sold more tickets than any other Latin artist, selling out arenas throughout Latin America, Europe, United States and Brazil and his hugely successful 2018 U.S. tour included 22 sold-out shows and sold over 200,000 tickets. Additionally, Maluma has been nominated for several awards including a Music Television (MTV) Europe Music Award for Best Latin America Central Act and a Latin Grammy Award for Best New Artist as well as a win for Best Radio Song at the 2013 Shock Awards for "La Temperatura." In 2017, Maluma was nominated for Top Latin Artist and Top Latin Song (“Chantaje”) at the Billboard Music Awards.