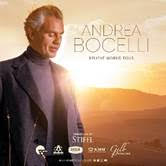 and Preferred Seat Presale Opportunity for Postponed or Cancelled Shows.

General Public On Sale For All Shows Begins May 3

Today, world-renowned Italian tenor Andrea Bocelli announced his Believe North American Tour, supporting his latest album of the same name. Bocelli's 21-city tour kicks off Wednesday, October 13, in Milwaukee, WI, with stops at the historic Hollywood Bowl in Los Angeles on October 24, his first performances ever in Kansas City and St. Louis, MO, a notable performance at New York's Madison Square Garden and a return performance at Orlando's Amway Center on Sunday, December 19. For the entire routing, please see dates listed below. Tickets go on sale to the general public on Monday, May 3 at 10 a.m. ET.

The tour will feature performances from Bocelli's uplifting new album "Believe," a poignant and personal collection of songs celebrating the power of music to soothe the soul, as well as a selection of arias, his beloved cross-over hits, and famed love songs. After a year of Bocelli's record-breaking live-streamed performances that brought comfort to viewers worldwide, Bocelli is bringing his blockbuster live show to U.S. audiences.

"It will be like going home, in each of the 21 cities," said Bocelli. "It will be exciting to meet again with the public of my beloved and great homeland who adopted me over 20 years ago. I await that moment with the joy and trepidation I felt at the beginning of my career. Because those arenas we meet in have a glimpse of the sun after such a storm. Because I will sing for the life that wins, and thanks to music, we will celebrate beauty and faith in the future together."

Preferred seat presale opportunities are available to those who choose to refund tickets due to any postponed or canceled shows on the tour. The general public on-sale for newly added dates and new on sales for postponed shows is Monday, May 3 at 10 a.m. ET. Purchase tickets at AmwayCenter.com, Ticketmaster.com or by phone at 800.745.3000.

Bocelli's U.S. tour is sponsored by global investment firm Stifel. "We're thrilled to serve as presenting sponsor of Andrea Bocelli's U.S. tour," said Ron Kruszewski, Chairman and CEO of Stifel. "Andrea's live performances are so poignant, and his connection with the audience is so genuine that he epitomizes the kind of shared experience we have been missing during a year of lockdown. We're particularly excited to share it with our valued Stifel clients by inviting them to purchase tickets before they go on sale to the general public through a special presale."

Additionally, the Bocelli Foundation and Believe North American Tour are proud to partner with PLUS1 so that $1 from every ticket sale throughout the tour will go towards empowering people and communities in situations of poverty, illiteracy, and distress due to illness and social exclusion. For more information, visit www.andreabocellifoundation.org and www.plus1.org.

As one of the most recognizable voices in the industry, Bocelli has been thrilling audiences for over 20 years, counting nearly 90 million records sold worldwide. Bocelli is one of the most celebrated singers in modern history, performing at major international events, including the Olympic Games and the World Cup and his sell-out arena shows worldwide. He has a Golden Globe, seven Classical BRITs and seven World Music Awards under his belt, plus a star on the Hollywood Walk of Fame. His previous album, "Si," reached No.1 on both the U.S. and U.K. charts.

Stifel is a full-service, global investment firm with a distinguished history of providing securities brokerage, investment banking, trading, investment advisory, and related financial services to individual investors, institutions, corporations, and municipalities. Established in 1890 and headquartered in St. Louis, Missouri, Stifel is one of the nation’s leading Wealth Management and Investment Banking companies. With over 400 office across the nation, and in Europe, Stifel is dedicated to providing superior services and products, the newest technological advances, and industry-leading client communication, plus the professional knowledge and exclusive research that help our clients pursue financial goals.