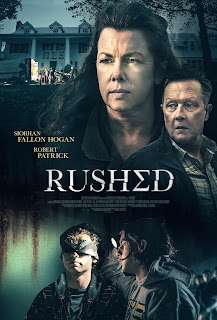 “I wrote the film because as a mother of three, I understand that Hell hath no fury like a mother scorned. After I completed the script, I sent it to Zentropa Films as I have worked as an actress with Lars Von Trier for over 25 years in his films, Dancer in The Dark, Dogville, and The House That Jack Built. They immediately called me and agreed to co-produce the film which was fantastic. I am thrilled to have the film with Vertical Entertainment domestically and Octane Entertainment internationally,” said writer, producer, and star Siobhan Fallon Hogan.

The deal was negotiated by Josh Spector of Vertical Entertainment and UTA Independent Film Group on behalf of the filmmakers.

Siobhan Fallon Hogan (SNL, Forrest Gump) stars, in addition to co-producing the film with Zentropa and writing the screenplay. If interested, happy to coordinate an interview with her -- she can discuss the inspiration behind the film, as well as her career. From her friendship with Chris Farley to working on the set of Men in Black, 30 Rock, and Seinfeld, before pivoting into the world of Lars Von Trier, she has a lot of great anecdotes.

Here is the plot of the film: Barbara O’Brien (Hogan), an Upstate New York, Irish Catholic mother who says her rosary daily, then swears profusely as she drives her kids to school. Barbara’s life is ruined when her son Jimmy (Jay Jay Warren), a college freshman, is involved in a fraternity hazing incident. Barbara resorts to extreme measures when she encounters empty promises in Washington, D.C.