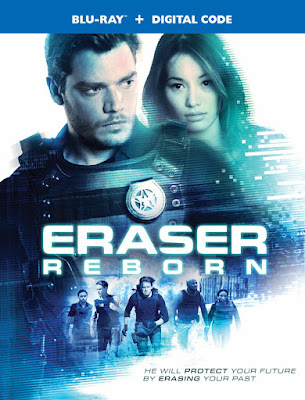 Get ready to grab your popcorn and favorite snacks - as you will be glued to the edge of your seat with the all-new movie - Eraser: Reborn - coming to Digital, Blu-ray & DVD on June 7 from Warner Bros. Home Entertainment.

The action-packed original movie is the next chapter to the blockbuster hit - Eraser (1996) - and comes out just in time for Father's Day gift giving!

With The Release on Digital, Blu-ray™ & DVD

U.S. Marshal Mason Pollard specializes in “erasing” people – faking the deaths of high-risk witnesses. With the technological advances of the last 25 years, the game has upgraded, and it’s just another day at the office when he’s assigned to Rina Kimura, a crime boss’ wife who’s decided to turn state’s evidence. As the two flee to Cape Town, South Africa, with a team of merciless assassins on their trail, Pollard discovers he’s been set up. Double-crossed and fueled by adrenaline, he needs to be at the top of his game, or he’ll be the one who’s erased. Permanently.

Eraser: Reborn is the next chapter to Eraser (1996) the Chuck Russell directed action thriller that starred Arnold Schwarzenegger as a U.S. Marshall assigned to “erase” the identity of a witness he is assigned to protect. The film also starred Vanessa Williams, James Caan and James Coburn and grossed around $242 million in worldwide box office.

Eraser: Reborn will be available to own on Digital on June 7, 2022. Digital purchase allows consumers to instantly stream and download to watch anywhere and anytime on their favorite devices. Digital movies and TV shows are available from various digital retailers including Prime Video, Apple TV, Google Play, Vudu and others.

Rated R for violence throughout and language