Tampa Theatre is proud to announce The Exorcist: Live Discussion with Linda Blair and Screening of The Exorcist. 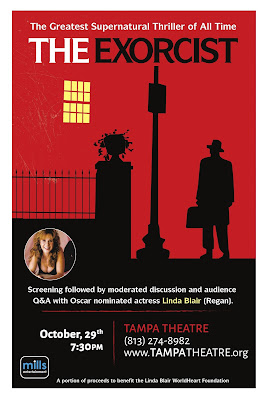 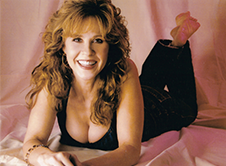 THE EXORCIST: LIVE DISCUSSION WITH
LINDA BLAIR AND SCREENING OF THE EXORCIST
LIVE AT TAMPA THEATRE

Tickets Go On Sale at Noon Friday, Sept. 25 for the October 29 Show

Tampa Theatre is proud to announce The Exorcist: Live Discussion with Linda Blair and Screening of The Exorcist LIVE on the Theatre’s historic stage at 7:30 p.m. Thursday, October 29 (doors open at 6:30 p.m.)Tickets will go on sale at noon Friday, September 25 at the Tampa Theatre Box Office, located at 711 N. Franklin Street in downtown Tampa, and online at www.TampaTheatre.org. Reserved-seating tickets are are $43 and a limited number of VIP Meet & Greet tickets at $103.50, plus applicable fees.

VIP POST-SHOW MEET & GREET
The limited number of VIP tickets include preferred seating and a VIP Post-show meet and greet with Linda Blair where guests can receive an autograph and a photo with the Hollywood icon herself!

Listed as “the scariest movie of all time” by Entertainment Weekly, The Exorcist endures as a defining classic that still shocks and haunts today. Join Academy Award nominee and breakout star Linda Blair (Regan) for a screening of the original ultimate horror movie which premiered back in 1973. Watch The Exorcist on a huge movie screen the way it was meant to be seen. Immediately following the film will be a moderated discussion and audience Q&A with Linda where she will share behind-the-scenes stories from the filming of this classic, worldwide phenomenon. A portion of the proceeds will benefit The Linda Blair WorldHeart Foundation. You’ll have to pay for the whole seat but you’ll only be using the edge!
The Exorcist has been called “the scariest film of all time” by Roger Ebert, AFI, Variety, Movies.com, & AMC. In 2010, the “Best Picture” nominated film was selected by the Library of Congress to be preserved as part of its National Film Registry.
Linda Blair has been a Hollywood icon for over 40 years. Her roles as a young actress included several pictures and television programs including The Exorcist, Born Innocent, and Sarah T. - Portrait of a Teenage Alcoholic. She had the lead in two cult classics: the women-in-prison film Chained Heat and the femme fatale vigilante action film Savage Streets. In 1997, she took to the Broadway stage and starred as "Rizzo" in the revival of Grease. Linda’s hit Fox Family TV series Scariest Places on Earth followed Linda as she visited notorious "haunted" locations around the world. Linda’s love of animals has led her to create the Linda Blair WorldHeart Foundation, a non-profit dedicated to rescuing and rehabilitating abused, neglected, and abandoned dogs from the harsh streets of the Los Angeles area, as well as from the overcrowded and overwhelmed city and county animal shelters