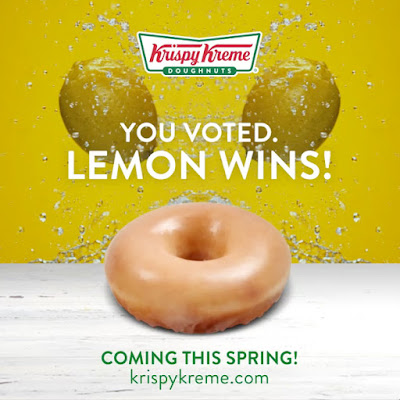 The Vote is In: America Selects Lemon as Krispy Kreme Doughnuts®’ New Glazed Doughnut Flavor
All-new Lemon Glazed Doughnut will be offered for one full week this spring
America dreamed, debated and, now … has decided. After casting nearly two million votes online over a week, America selected lemon as Krispy Kreme Doughnuts®’ next, all-new glazed doughnut flavor.
Krispy Kreme’s innovation team will craft and perfect the Lemon Glazed Doughnut flavor, which will be made available this spring for a full week (exact dates to be announced soon) at all Krispy Kreme shops throughout Central Florida.
The #VoteForGlaze campaign was the first time Krispy Kreme let America decide an all-new Glazed Doughnut flavor for the brand’s iconic Original Glazed® Doughnut. Fans selected from four flavors – blueberry, caramel, lemon and maple – January 16 through 22 at www.voteforglaze.com. Lemon was America’s top choice, garnering 36 percent of the vote. Caramel received 26 percent of the vote, blueberry received 20 percent followed by maple, which received 18 percent.
“Lemon won the vote, but we can’t glaze over the fact that the other three flavors all received a lot of support, even beyond the votes. Our fans’ passion for these flavors – and others – came through loud and clear on social media. So while the polls are closed, our minds are not,” said Jackie Woodward, Chief Marketing Officer of Krispy Kreme Doughnuts®.
About Krispy Kreme Doughnut CorporationKrispy Kreme Doughnut Corporation is a global retailer of premium-quality sweet treats, including its signature Original Glazeddoughnut. Headquartered in Winston-Salem, N.C., the Company has offered the highest-quality doughnuts and great-tasting coffee since it was founded in 1937. Krispy Kreme Doughnuts is proud of its Fundraising program, which for decades has helped non-profit organizations raise millions of dollars in needed funds. Krispy Kreme doughnuts can be found in approximately 12,000 grocery, convenience and mass merchant stores in the U.S. The Company has more than 1,300 retail shops in 31 countries. Connect with Krispy Kreme Doughnuts at www.KrispyKreme.com, or on one of its many social media channels, including www.Facebook.com/KrispyKreme, and www.Twitter.com/KrispyKreme.
Publicadas por Axel a la/s 7:52:00 a. m.