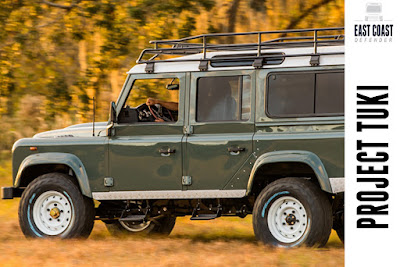 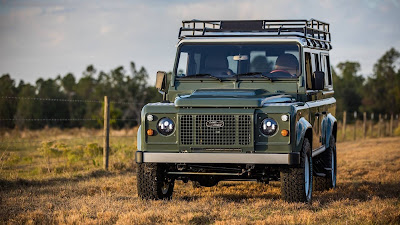 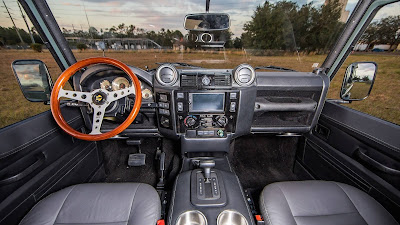 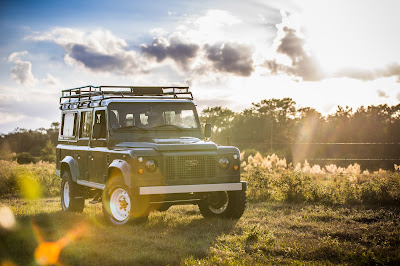 Defenders have always been sweethearts of the off-road community, and as a consequence, some of the most popular models for modifying. Even Land Rover is doing it with the Works V8, but the aftermarket remains in a league of its own. Case in point: Project Tuki from East Coast Defender.

What started life as just another Defender 110 was turned into the magnificent machine you can admire in the photo gallery by the Kissimmee-based shop. In addition to the white-painted steelies, the Keswick Green paint and heritage-infused detailing definitely pop out.
Setting Tuki further apart from the crowd is the checker set in metal and KBX wing-mounted air intakes finished in Santorini Black. Wrapped in BF Goodrich all-terrain tires, the modified Land Rover Defender 110 also boasts a no-nonsense roof rack with a ladder and rear-mounted work light.
Opening the door reveals Panda Charcoal-finished leather for the front, middle, and rear seats, complemented by black leather on the dashboard, door cards, and center console. The steering wheel, while it may look out of place, is made by the classic car enthusiast’s favorite company: Nardi.
The Puma dashboard is furthered by Kenwood infotainment, which appropriately for an off-road vehicle, includes GPS navigation and a backup camera. More modern functions are also featured, including the ever-popular Apple CarPlay and Android Auto smartphone mirroring.
As for the business end of Project Tuki, East Coast Defender took one example of the 4.0-liter Rover V8, rebuilt it, then shoved it back in the engine bay. Turn the key in the ignition, and the old-school engine fires up into life, developing 175 horsepower at the crankshaft. Being built for the U.S. market, the transmission comes in the form of a five-speed ZF automatic.
Defender ownership doesn’t get much better than this, does it? But if you’re feeling lucky, the Works V8 is an even better, more ludicrous proposition thanks to its 5.0-liter V8 with 400-plus horsepower on tap.
Publicadas por Axel a la/s 8:35:00 p. m.