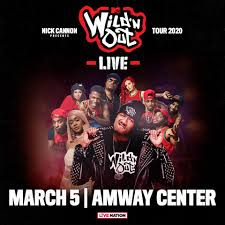 Multi-hyphenate entertainer Nick Cannon announced the expansive 27-city arena tour for his wildly popular MTV Wild ‘N Out Live today. Produced by Live Nation and Laugh Out Loud, the tour kicks off on March 3 in Jacksonville, FL and returns to Orlando’s Amway Center Thursday, March 5. Tickets go on sale to the general public on Friday, January 10 at 10 a.m.

Fans can expect stand-up routines by their favorite Wild ‘N Out cast members including DC Young Fly, Karlous Miller, Emmanuel Hudson, Justina Valentine, Hit Man, Conceited, DJ D-Wreck and Pretty Vee (lineup varies by city), as well as live music performances by Saweetie (“My Type” and “Icy Grl” - Recording Industry of Association of America platinum-certified). Additional special guests will continue to be announced. Each night, Cannon and the cast will also invite members of the audience to join them for Wild 'N Out’s most popular games.

Born Diamonté Harper — Saweetie cracked 100 million cumulative streams, garnered a gold plaque and earned the praise of Billboard, The FADER,  Noisey and the Los Angeles Times pegged her as, “one to watch this year.” She turned her love for words into vivid verses during 2018 on her “High Maintenance” extended play (EP) with her smash hit, "Icy Grl." In 2019, she released her “ICY” EP, which produced viral sensation, "My Type" and debuted on Billboard's Hot 100 and Pop Songs charts, hit number one on Urban and Rhythmic radio and is currently Top 25 on Pop radio. Managed by Max Gousse (Artistry Group) and represented by Creative Artists Agency, she is set to perform a series of shows in the new year and is preparing her full-length debut for release soon.