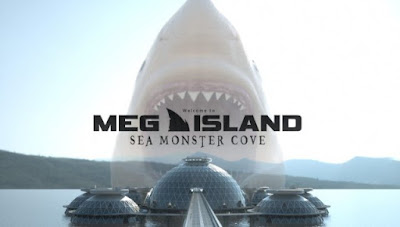 Steve Alten plunged readers headfirst into the Mariana Trench and the waiting jaws of the Megalodon in his NY Times bestselling MEG series. It took 21 years to bring his giant shark tale to the big screen (No. 1 at the box office starring Jason Statham); now, after nearly a year of planning, hard work and money, Alten has taken the art of storytelling one step further — actually placing the viewer directly in the action.

The Sea Monster Cove website of Alten’s imagination is a spectacular, five-star aquarium-themed resort located on Maug, a remote (and very real) island in the Western Pacific. Maug's volcano erupted 5 million years ago; today all that remains are three uninhabited islets that had been the volcano’s rim and a flooded magma chamber that serves as its lagoon. Why place a virtual island resort here? That's where Alten's research and storytelling takes over. “Eight years ago, a French marine biologist, Dr. Maxime Rostand discovered superheated mineral water rising up through Maug’s lagoon. Through a series of events — including an emergency C-section which saved two pups of a deceased pregnant prehistoric Mako shark, Rostand discovers the source of the hot mineral water to be a primordial aquifer located 2 miles beneath the seafloor — its inhabitants dating back 380 million years.”

It is this tale of adventure that will be told in Alten’s original episodic web TV series, Where Sea Monsters Roam (offered only to website members). Most unique: this story is woven through every offering at the Sea Monster Cove website, beginning with your entry into this amazing virtual world.

Imagine the greatest aquarium-themed park ever conceived, penning the most terrifying prehistoric sharks and sea monsters that ever lived. It’s not hard to do. At Sea Monster Cove, the special effects are motion picture-worthy, and the wildlife doesn’t just swim around in benign circles; in fact, they seem quite aware that you are watching them, and they clearly do not like it, especially when you enter their domain to do a little “cage diving.” In each of these heart-pounding, 360-degree experiences, the user controls the viewing angle, attempting to track the attacks as they happen (there are day and night versions available). The action is non-stop and the creatures so real that it is easy to lose yourself in a two-hour reprieve from reality.

While the author had no say in the movie adaptation of The MEG, he’s clearly in charge of the undersea action and characters in his new TV series, Where Sea Monsters Roam. Most unique: What happens in the series also happens during your aquarium visits. As an example, if Snowflake, the park’s 63-foot, 25-ton prehistoric albino Mako drags a crane into her tank in the opening episode, don’t be surprised to see it lying on the bottom on your next visit!

But Alten isn’t done quite yet. Why settle for visiting captured beasts when you can experience hunting them down in the Sea Monsters Roam video game? Or read about them in the Educational Center, run by a real ancient shark expert and museum curator. And a private library offers enhanced versions of all of Alten’s novels — along with curriculum materials for teachers — all free to members.

There’s even a kid’s cartoon in development.

Perhaps the most surprising element is the cost to enter, priced well below a movie ticket.

And Alten isn’t quite done with movies yet. The MEG sequel, MEG-2: The TRENCH, is in pre-production, as is The LOCH (a thriller about the Loch Ness Monster) along with one other underwater feature, which cannot be announced just yet (but the enhanced version of the novel is available in the website’s private library). Steve Alten is also the founder and director of the nonprofit Adopt-an-Author teen reading program, considered by many educators to be the most effective tool to get reluctant readers to read.

Visit www.seamonstercove.com to begin your adventure!